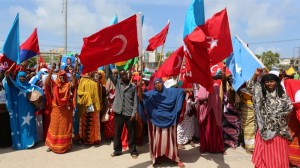 Afyare Abdi Elmi : Jerome Jarre’s viral hashtag, #TurkishAirlinesHelpSomalia, was yet another attempt to draw worldwide attention to the famine in the Somali peninsula, but the Somali people are in need of both an organised, short-term as well as a long-term response to ensure that this crisis is contained, and does not happen in the future.

In Somalia, the cycle of long droughts followed by famines has been going on for many decades. Now, more than five million Somalis need immediate assistance in order to prevent another famine. “This drought has created the biggest displacement of people in the country,” said Adan Adar, the country director of the American Refugee Committee.

Somalis from all over the world, as well as a large number of local and international NGOs, have been collecting and sending in donations.

In order to save as many people as possible, an immediate and large-scale humanitarian campaign effort followed by a sustainable development strategy that can help build resilient state institutions to control the negative effects of future drought occurrences are necessary.

The model the Turkish government employed in 2011 and 2012 offers an innovative perspective. Therefore, donor countries must consider adopting it for Somalia.

Humanitarian agencies and international organisations have started rescue efforts by raising the awareness of the world community.

In early March, the United Nations Secretary-General Antonio Guterres, paid an unannounced yet timely visit to Somalia in order to mobilise the international community to help rescue the people who were affected by the drought.

In fact, in the past, Guterres has been a consistent supporter of Somali people. For instance, when he was the commissioner for the UNHCR, he pressured both Kenyan and Somali governments to respect the human rights of the refugees.

As recently as 2011, Somali people have experienced one of the worst famines in the Horn of Africa region, which killed more than 250,000 people and displaced at least one million.

In their book Famine in Somalia, Daniel Maxwell and Nisar Majid rightly characterised the responses to this famine as “collective failures”.

In 2011, Recep Tayyip Erdogan, the current president of Turkey, was the first high-profile figure who visited Somalia, with the intention of raising the awareness of the international community.

At the present time, even though millions of Somalis are on the brink of starvation, there has been a lack of attention and support from the world community.

Therefore, the next few weeks are crucial for controlling the damage of the drought. Perhaps, the countries of the Gulf Cooperation Council (Saudi Arabia, Qatar, Kuwait, United Arab Emirates, Oman and Bahrain) are well positioned to lead the short-term humanitarian efforts in Somalia because of their strong economies, geographic proximity, and cultural and historical relations with the Somali people.

In Somalia, because of the lack of a functioning state, there are few mechanisms to control droughts from becoming famines. In order to reverse this and establish functioning state institutions, I believe, we can learn several lessons from the model that Turkey employed in 2011.

First, the Turkish model combined aid and development. For instance, in 2012-2014, the Turkish Red Crescent managed the Rajo camp for the 29,000 internally displaced people in Mogadishu.

At the same time, only a few kilometres from the camp, the Turkish Development Agency and a private corporation brought large construction equipment that built major roads in Mogadishu.

Third, the Turkish model focused on high-impact infrastructure development projects. For example, these included hospitals, an airport and major roads.

Fourth, since the capacity of the Somali institutions are low, Ankara has used public-private partnerships to deliver most of the capital projects.

Turkish companies managed the Mogadishu airport and port, and delivered the construction of the tarmac roads. The Turkish Airways regularly flies to Mogadishu. With a new terminal in the airport, hopefully, more airlines will fly into the country.

Even though some of these companies were interested in making profits from their entrepreneurial adventures, Somalis still benefitted from their presence.

Turkish companies forced Somali businesses to compete. The more companies that arrive in Somalia, the more people that will get jobs and choices. Prices will fall and the quality of service will improve.

Finally, being on the ground was perhaps the most important factor that has helped Turkey to receive widespread support from the Somalis.

Turkish diplomats and aid workers stayed in the country, which helped them understand the Somali people and their needs better. For them, there was no need for mapping studies. Staying on the ground has significantly reduced the administrative cost as well.

Donor countries have provided billions of dollars of assistance to the needy Somalis for the last couple of decades – which Somalis appreciate.

Recently, the world community helped rescue millions of Somalis from famine in 1991 and 2011. It is a fact that the European Union, the United States and other donors have supported the Somali people in many ways.

Indeed, besides contributing to the recovery and the development of the country, the Somali diaspora in the Western and Gulf countries are now on the frontlines of the rescue efforts in Somalia.

That said, to maximise the impact of the billions of dollars of aid that the West, Gulf countries and others provide to Somalia, the current aid paradigm must be revisited.

To date, few donors invested in the infrastructure and long-term impact projects. As important as relief and capacity building projects are, it is more useful to invest in major, capital projects such as a tarmac roads, ports and hospitals.

The Turkish aid model opened new doors for the Somali people. Western and Gulf donors should follow suit and invest in the long-term projects that can help empower the state institutions, prevent another humanitarian catastrophe and contribute to the economic growth of the country.

In short, hundreds of thousands of Somalis are now on the verge of starvation. We must do all we can to rescue as many people as possible through large-scale humanitarian efforts.

Hopefully, the GCC countries will lead this campaign. In doing so, we must learn from the 2011 experience and the model that Turkey employed. Simultaneous relief and development efforts are necessary.

Afyare A Elmi is an associate professor at Qatar University’s Gulf Studies Program. He is the author of the Understanding the Somalia Conflagration: Identity, Political Islam and Peacebuilding.