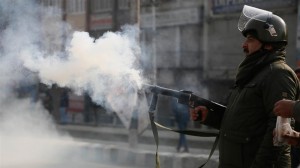 by Rifat Fareed : Six rebels were killed in a gunfight in Arampora village of Tral in the southern part of Indian-administered Kashmir as India continues to intensify its operations in the disputed region.
Swayam Prakash Pani, the Kashmir police chief, told that a search operation was launched in Tral on Saturday morning in which six rebels were killed.

“There was no collateral damage. We continue to urge people not to come near the gunfight sites as they are prohibited places. The operation took place in an open field in the morning,” the official said.

Another official said that all six rebels were locals and belonged to Ansar ul Gazwatul Hind, an armed Kashmir-based group that claims to be an offshoot of al-Qaeda.

The officials said that one of the rebels was a top commander of the group, who was active in southern Kashmir.

Soon after the encounter, residents in Tral and adjoining areas took to streets to protest the killings.

Authorities suspended mobile internet services across the district, saying as all the slain rebels belonged to the villages in southern Kashmir. The officials said that the train services have also been suspended for the day to avoid possible law-and-order problems.

“The fighters are from the adjacent villages and thousands of people are on roads to take part in the funeral. For us, it is a daily bloodbath. Every day, we wake up with the news of a death. We just want an end to it, so that we too can breathe,” said Munisa Ismail, 26, a resident of Tral.
The tension also continues to escalate on the Line of Control (LOC), a demarcation line that divides the two parts of the disputed territory between Indian and Pakistan-administered parts.

On Friday evening, the Indian authorities claimed that two of its junior commissioned officers were killed in north Kashmir’s Jumgund area of frontier Kupwara in a cross-border attack.

The Indian forces have intensified the operation in Kashmir, killing a record number of 232 rebels so far this year.

The civilian casualties this year have also been highest in the last nine years. According to a local human rights group, Jammu and Kashmir Coalition of Civil Society (JKCCS), 156 civilians have been killed in the violence this year.

Last week, the forces shot dead seven civilians in Sirnoo village of Pulwama after firing on demonstrators following a gunfight in the village in which three rebels of Hizbul Mujahideen outfit were killed.

She said that the “security forces are increasingly using indiscriminate and excessive force against civilians”.

Amnesty International has demanded authorities conduct a full and independent investigation into the incident, and those responsible prosecuted in a civilian court of law.

The Indian forces in Kashmir are protected by Armed Forces Special Powers Act (AFSPA), a law that provides the forces immunity from prosecution.

Amnesty in a statement said that the “law enforcement officials should distinguish between persons engaging in violence and peaceful demonstrators”.

The disputed territory, over which India and Pakistan have fought three wars, is currently under the president’s rule after India dissolved the state assembly last month.

After the six-month tenure of the governor’s rule expired, the president’s rule was imposed in the region on December 20, which will continue for six months after which fresh elections are likely to be held.