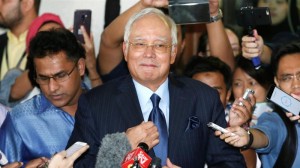 The new charges include four counts of abuse of power and 21 counts of money laundering over hundreds of millions of dollars of funds received in his personal bank account.

Najib was detained by Malaysia’s anti-corruption agency on Wednesday, for allegedly transferring $681m into his personal bank account, as part of investigations into the 1MDB state investment fund.

The former leader was questioned by police and then appeared in court in the capital, Kuala Lumpur, on Thursday. Najib pleaded not guilty to all charges after they were read out in court.

The money laundering charges include nine counts of receiving illegal proceeds, five counts of using illegal funds and seven counts of transferring the proceeds to other entities, Deputy National Police Chief Noor Rashid Ibrahim said on Thursday ahead of the court hearing.

The latest charges bring the total number against Najib to 32.

He has previously been charged with money laundering, criminal breach of trust and abusing his position over claims he pocketed some $10m from SRC International, a subsidiary of 1MDB. Najib has consistently denied any wrongdoing in relation to those charges and his trial is due to start next year.

“These new charges are significant because prosecutors allege the money flowed directly from 1MDB, the state investment fund that Najib had set up,” said Al Jazeera’s Florence Looi, reporting from Kuala Lumpur.

“They will involve a much more complex investigation,” she added. “Investigators believe that front companies as well as foreign offshore entities were used to siphon the money from 1MDB and eventually into Najib’s personal bank account.”

Officially called the 1Malaysia Development Berhad, the 1MDB state fund is the subject of a sweeping international investigation by at least six countries, including the United States, Singapore and Switzerland, over alleged money laundering and corruption by high-level officials.

The 1MDB scandal first became public in 2015 when leaked documents showed that $681m was transferred into Najib’s bank account, leading to massive street rallies calling on him to resign.

The US Department of Justice estimates officials misappropriated $4.5m in total from the fund.

The scandal was a key factor in Najib’s shock defeat in the May elections.

The new government – a coalition of opposition parties headed by Prime Minister Mahathir Mohamad – reopened investigations into corruption at 1MBD that were stifled while Najib was in office and set up a special task force.

Najib was released on a 1 million ringgit ($250,000) bail by a Kuala Lumpur court after his first arrest in July.

He and his wife, Rosmah Mansour, who has also been questioned in the scandal but has not been charged, are barred from leaving the country.

Cash, jewellery, luxury handbags and watches worth an estimated 1bn ringgit ($250m) were seized by investigators from multiple Najib-linked private residences in May as part of the probe.

“He is alleged to be a key figure and the mastermind of this complex scheme to defraud the Malaysian government,” she said.