Orphaned by the mudslide in Sierra Leone’s Freetown 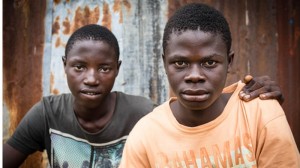 by Catherine Elgonaid : In the blue hour of dawn, brothers Isaac and Idris picked their way back home along the mud and stone track from morning prayers at their local mosque. The rain was heavy and there was little light, but they could have walked the familiar route with their eyes closed as they had walked this path together every day of their lives.

Their fisherman father had one firm rule for them: “Each morning, go to prayers at 4am and be back by the time I wake at 6am. ”

The boys obeyed this rule every day, dutifully.

On Sunday, August 14, their 20 minute walk back was cut short. “We found red tape across the road,” says Isaac, 16. “When we asked why and tried to cross, the people gathered there told us ‘don’t, don’t go there, your parents are already dead.’”

The family lived in Regent in Freetown, the epicentre of the Mount Sugar Loaf mudslide - the area where ‘the mountain broke,’ as witnesses say. It had rained more than in any other rainy season they can remember, the locals say – and the waterlogged side of the mountain buckled and sheered off, sending heavy boulders, trees and wet earth down on top of a whole community, wiping it out in just moments.

Among the buildings swept away were an orphanage where over 60 children slept, a church filled with 70 students taking extra lessons, and family homes, like Isaac’s and Idris’ where they lived with their parents and other relatives.

“Mum was a housewife,” Isaac says, his voice low. “She would cook us breakfast and then, after I played football, she would see I was hungry and smile and make me some more rice.”

The boys followed streams of survivors and neighbours making their way to a makeshift emergency centre that the government and NGO partners opened in a nearby primary school, empty during the summer holidays.

“We were afraid,” says Isaac. “How would we eat? Where would we sleep? What would we do?”

With other relatives in rural villages on the other side of the country, the brothers had nowhere else to go and no one to call on.

For days, grieving and dazed, they melted into the crowds of survivors. Despite their vulnerability, they went unnoticed in the chaos, until they were spotted by Cecilia Mansaray, a social work coordinator for the charity Street Child, one of the first organisations on the ground to respond with humanitarian aid.

“I started to notice that there were two boys, always there together at the centre, so quiet, so helpful every time a vehicle needed to be unloaded,” says Cecilia. “It clicked that something wasn’t right. They were always in the same clothing.”

Cecilia asked them to tell her their story. “They were sad and confused,” she says. “And so traumatised, having being orphaned and then left to their own devices.”

Immediately, Cecilia set to work sourcing donated clothes for the boys to change into and arranged for trauma counselling, despite her team being stretched to capacity distributing food.

“We are not happy, but because of their help it’s much better,” says Isaac. “From the very first day we met, they have been so kind to us.”

“We tell them all hope isn’t lost,” Cecilia says. “They lost their parents, yes, but we say the fact that you are alive means you can tell your story. We focus on giving them courage. And we advise them not to go back down towards the site. It would be too upsetting.”

Getting by after the mudslide

A short walk from the centre now lies a vast wound in the green hillside and valley. Dogs roam the churned red earth, picking their way around boulders and broken remnants of concrete.

“They feed on the body parts,” one worker says.

Corpses that could be removed were taken for mass burial, but many were too broken or hidden in the debris for the army to retrieve.

The brothers do not know where their parents’ bodies are. Isaac is younger, but he is taller and more confident, looking out for and talking on behalf of his gentle, shy 18-year-old brother Idris, who the team think may have learning disabilities.

Cecilia asks Idris where the clothes she gave them a few days ago are. He chews harder on the white lollipop stick in his mouth and looks over at Isaac, who speaks up in the kind of voice a teenager might use to confess to having failed an exam.

“They were stolen,” he says.

For days the brothers did not get enough to eat, Isaac explains. Food aid is rationed to make sure everybody gets something. Nearly six thousand people are registered as requiring assistance, and the need outstrips the available resources.

Isaac had tried to earn some money to buy a little more for them to eat from street vendors. He left Idris with the precious bag while he went to help unload a truck and earn enough to buy some cooked rice.

When he returned, the bag was gone.

Cecilia drags forward a large plastic shopping bag. “Lucky I’ve brought you some more,” she says. Immediately, the boys smile, taking turns trying on a pair of flips flops and holding up jeans to see if they will fit.

“My boys,” Cecilia says, watching on. “Isaac is the same age as my son. It is as if this is happening to him.”

“They all call her ‘Street Mama’ here,” says one of her colleagues fondly.

Looking to the future

Cecilia is determined to find a way for the brothers to carry on their education.

“We had to leave school a few years ago because my father lost his job and couldn’t pay,” Isaac says. “I want to go back. I don’t want to live like this. I want to be a good person in society, like an accountant.”

Idris considers the question for a while. “President,” he declares.

Primary school is technically free in Sierra Leone, though mandatory costs for uniforms, stationery and books mean in reality it costs about $20 a year per child. But secondary schools charge fees.

“After this disaster, we are going to need more help to support them and other vulnerable children to get an education,” Cecilia says.

The boys spend their nights on the crowded bare floor of the same mosque in which they prayed on the morning of the mudslide.

The mosque, with nothing to offer but a roof and walls, has given refuge to over 50 affected people. Many people registered in emergency centres are now being relocated to camps, but in order for this to happen they must first be verified by the authorities – the Office of National Security reports that so far 7 percent of cases have proven to be false claims.

Isaac and Idris face yet another problem. “I queued up and tried to do it,” Isaac says. “But they say verification can only be done with the head of the household.” Those under 19 are considered minors and not eligible to be listed as the head of a household.

“We need to fix this,” says Cecilia. She marches, with the boys in tow, to the government officials facing crowds of people under a heavy sky outside the school.

After applying some greetings and charm, she advocates robustly for the brothers to be verified. “Our organisation has confirmed their story,” she argues. “They have nowhere else to go.”

As Cecilia and the officials talk, Isaac looks at the ground again, fumbling a bar of soap over and over in his hands.

Idris observes the swarms of desperate people, lost in his thoughts, as if he is trying to be anywhere but here.

“Ok, we know Street Child,” the official finally says. The organisation is known to work closely with the community, and the word of its social workers is as strong a verification as any.

Until then, the boys will return to the mosque, where each evening the imam holds special prayers for those who died and those – like Isaac and Idris – who are left behind with nothing.

Usually, over Eid, Isaac says, “Mum would make lots of special food – like spaghetti, or chicken stew, along with the rice. People, neighbours would come and join us…”

This Eid is very different now they are a family of just two.

To donate to the Sierra Leone emergency relief visit: www.street-child.co.uk