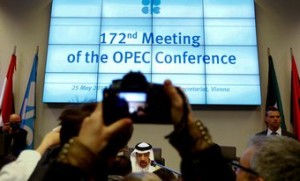 The world will still have a surplus of oil by end-March next year, Saudi Arabia’s energy minister said on Thursday, signaling a willingness to extend output cuts when OPEC meets at the end of November on whether to extend caps well into 2018.
Khalid Al-Falih also said he did not want oil prices to rise too fast and too soon to shock consumers, adding that the exit from production cuts would be gradual to make sure market reaction is smooth.
“We need to recognize that by the end of March we’re not going to be at the level we want to be which is the five-year average, that means an extension of some sort,” he said, referring to inventory levels in the developed world.
“We have gone over 50 percent in reducing excess inventories but that means we still have some excessive inventories that we need to drain,” he told journalists on the sidelines of the UN climate conference in Bonn, Germany.
“We don’t want any spikes in price that shock the market. We don’t want any price movements that are unhealthy for demand. We don’t think we’ve seen any of that yet but that’s a potential especially if God forbid we have disruptions in any major country. We’re hopeful none of this will happen.”
Asked about the most recent spike in oil prices to a two-year high this month he said, “I am not distracted by short-term gyrations in prices and I certainly don’t spend time looking at hedge funds and the flows into financial investment instruments.”
Falih said it was too early to make an assessment on a possible extension to OPEC’s global oil output cuts now, but said Saudi Arabia favors making an extension decision at the next OPEC meeting at the end of the month.
“The November 30 meeting will be an important milestone to announce the way forward. My preference is to give clarity to the market and announce on November 30 what we’re going to do.”
He said Riyadh was in extensive consultations with all colleagues around the world within and outside OPEC.
Asked whether Russia was committed, Falih said: “I have had extensive consultations with my Russian colleagues and I will have some more in the next two weeks, but I know one thing is that the Russians are committed to working with Saudi Arabia and with the rest of the 24 countries that have come together last year.”
He said OPEC will have a better picture closer to the meeting on market fundamentals that will help in making the decision.
“We are waiting for October data to be fully developed and shared with the technical team,” Falih said.
“We’re also waiting for better projections of the fourth and first quarter which are typically lower demand and we will have picture of supply from sources that are not part of the deal. That will give us better predictions on when markets will balance as well as finishing the consultation.”
Asked how OPEC would deal with potential supply shocks to the market including from OPEC member Venezuela where oil production hit a 28-year low recently, he said OPEC’s reaction would depend on the length of the disruption.
“If anything is extended then we will take proper action to make sure that consumers around the world are not short of oil.”
“I assure you that nobody will be short of oil but at the same time we will not stop our current action until global inventories are rebalanced,” he said.