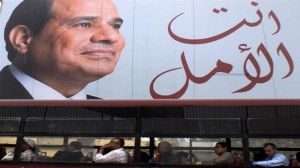 In a result that comes as no shock to Egyptians and the rest of the world, Abdel Fattah el-Sisi has won the presidential elections with 97 percent of the votes, final results showed, securing another four-year term.

The elections were criticised as a one-man show with no credible opposition, as at least six other candidates pulled out, were prosecuted, or jailed.

Announcing the final results on Monday, Egypt’s election commission said there had been a 41.5 percent turnout, lower than the 47 percent in the 2014 election.

The only other opponent who ran against el-Sisi was little-known Mousa Mostafa Mousa, who entered the race hours before the deadline and whose party had previously endorsed el-Sisi.

Preliminary results released on Thursday showed that Mousa had received just three percent of the vote, and according to The Economist, came in third place after more than one million people spoiled their ballot papers.

Some had crossed out the names of the two candidates and added the name of popular Liverpool and Egyptian national football player, Mohamed Salah, reportedly giving him twice as many votes as Mousa.

Yet the results were revised the next day to suggest that there were no spoiled ballots.

“The elections were a joke and a complete fabrication,” Sarah Yerkes, a fellow at the Washington-based Carnegie Endowment for International Peace, told. “They are not really a meaningful marker for the country.”

‘Further pain in store for Egyptians’

El-Sisi’s first term in office, which he won after the military removed then-President Mohamed Morsi from power, was characterised by promises he failed to deliver on, such as eradicating “terrorism” and improving the country’s economy.

Gulf countries, most notably Saudi Arabia and the United Arab Emirates, pumped billions of dollars of investments into Egypt when el-Sisi first took office, but that was paralleled by “unprecedented levels” of suppression, James Gelvin, professor of Modern Middle East History at the University of California, Los Angeles, told.

“The quick infusion of cash did nothing to alleviate the Egyptian economic crisis in the long term, which is the result of poor economic planning, cronyism, and demographic explosion,” he said.

The economic crisis in Egypt will be el-Sisi’s priority during his second term in office, at the cost of plunging the population into further misery, Galvin said.

The professor cited a number of factors that currently afflict the economy, saying they will likely worsen, such as high unemployment rates, the curtailment of food and fuel, unprecedented income inequality, and plutocratic rule.

“In a world in which neoliberal economic policies are the sole prescription for national economies in crisis, there is only further pain in store for Egyptians,” he said.

“Under these circumstances, Sisi will undoubtedly continue the harsh repression, probably citing the threat of terrorism as the reason.”

The 63-year-old former commander-in-chief of the armed forces maintains a loyal base of supporters, who view him favourably as a force for stability rather than democracy.

“No one believes he is a democrat,” Sarah Yerkes said. “Rather, many Egyptians are happy to sacrifice democracy if it means greater economic performance, stability, and security.

“The problem with that argument,” she added, “is that Egypt’s economy and security situation have both deteriorated under Sisi’s authoritarian rule – not improved.”

According to Gelvin, Sisi relies on continued support from the “deep state” – which includes the military, the bureaucracy and the judiciary – and its supporters.

Furthermore, the president’s influence is not just contingent upon domestic support but depends on regional and international support that hinges on maintaining the status quo in the region – most notably from Saudi Arabia and the United States.

“Sisi will stay in power so long as the deep state wields the influence it does, and he continues to cow the remainder of the population,” Gelvin said.