The UK government’s silence on Myanmar is shameful 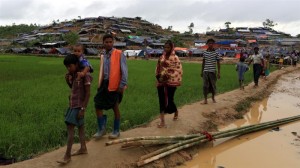 by Lloyd Russell Moyle : A decade ago, the military government in Myanmar cracked down on peaceful protests for economic and political reform, killing an estimated 100 monks and triggering a wave of international diplomatic activity to curb the violence.

In preceding years, the UK’s Labour Party had been lobbying within the EU, successfully securing tighter sanctions on the Myanmar military. The UK was instrumental in bringing a debate on Myanmar for the first time to the UN Security Council, a path to binding resolutions.

When the military started killing the monks in 2007, Gordon Brown led the world in the international effort to de-escalate the situation. He expended political capital by lobbying the US president and Chinese premier to take diplomatic action and made representations directly to influential people within Myanmar itself. David Miliband, the then foreign minister, coordinated EU leaders into a unified bloc against the military government.

Fast forward and Myanmar civilians are suffering a considerably graver human rights catastrophe at the hands of the same military. But this time they will find no help in Britain.

This is, sadly, of no surprise. The top Foreign Office civil servant has said the government has deprioritised human rights for its so-called “prosperity agenda”. And Tory infighting has rendered the government sclerotic and unwilling to respond to the violence, which the UN has called a “textbook case of ethnic cleansing”.

We have heard credible and corroborated reports, since August, of mass killings, rape, arson, looting and extortion. Thousands have been killed, hundreds of villages have been destroyed and some 600,000 Rohingya have been forced to flee to Bangladesh.

The UK government has responded to these crimes against humanity by announcing an aid package and sending out a handful of Foreign Office staff on a fact-finding mission.

Yes, aid is important, but it is only politics that will stop the killing, and the UK government seems to be demonstrating a distinct lack of political will over the slaughter of the Rohingya.

We should be leaning on Israel, a major supplier to the military government, to end the trade of light arms and vehicles which are being used to commit war crimes. If Israel were to rightly argue that Britain should perhaps end its own material support of the Saudi bombing campaign and maritime blockade of Yemen, Labour would happily agree with them. Neither of us should be profiting from war crimes.

We should be rallying international actors, especially China and India, both bilaterally and through the UN, to stop the slaughter and to allow unfettered humanitarian access in Rakhine state.

While we are still in the EU, we should be using our membership to build support for the banning of any sales of equipment to the Myanmar military, and calling for a UN-mandated global arms embargo to stop unscrupulous nations from profiting off these war crimes.

And we should be openly calling for a referral to the International Criminal Court of those involved in this campaign of ethnic cleansing, wherever that may lead.

These steps will not, alone, end the violence, but they will help, and, at the very least, they will show the military government, the Rohingya and the world where the UK stands.

The government is also labouring under the delusion that Aung San Suu Kyi, Myanmar’s top civilian leader, will rescue the Rohingya any day now. The theory goes that putting pressure on the military government would risk snuffing out the post-2011 reforms that they allowed, ceding limited power to her democratically elected party.

This is why Britain supported, with GBP10m ($13m) in finance and political support, a census which omitted the Rohingya as a minority – an ugly and significant step to ethnic cleansing, but one which the government made as a concession for the wider reforms.

The whole point of supporting constitutional reform in Myanmar was to help reduce human rights abuses. But those have instead dramatically increased, and Aung San Suu Kyi has not used her current power to release political prisoners or change a 1982 law, which stripped the Rohingya of citizenship. Instead, she has dismissed reports of ethnic cleansing in her country as “fake news”.

The military government is not interested in reversing the piecemeal reforms. They know that they have won international sanctions relief and that this provides a shield to international action, allowing them to kill their own people with impunity.

Our deadly silence has proven them right.