Thousands Palestinians gathered for the funerals on Israeli ‘unlawful killings’ 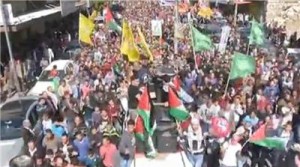 Thousands of Palestinians in the city of Hebron have gathered for the funerals of five teenagers shot dead by Israeli forces in alleged stabbing attacks, including one girl who Amnesty International says was unlawfully killed.

Seven bodies were released for burial by Israel to their families on Friday after intervention by Palestinian President Mahmoud Abbas, as well as international groups.

In the Bab al-Zawiya area of the city, around 300 protesters clashed with Israeli troops, who used live ammunition, rubber-coated steel bullets, tear gas and stun grenades.

Earlier this month, the Israeli government decided to retain the bodies of Palestinians accused of attacks against Israelis.

Israel says the five stabbed or had attempted to stab soldiers.

Issa Amro, director of the Hebron-based Youth Against Settlements activist group, said that locals “don’t believe the Israeli claims that they were trying to stab [Israeli soldiers or settlers]“.

The family of 17-year-old Dania al-Husseini Irsheid, whose burial was expected on Saturday, told Reporters she could not have been carrying a knife at the time of her shooting.

Her father said she was shot by an Israeli soldier after passing through two army checkpoints in the occupied West Bank.

“They say she had a knife. If you have even a metal screw the machines will pick it up. She’d already been searched twice,” Jihad Irsheid said.

“Then a soldier yelled at her: ‘Where’s your knife?’ She yelled back, ‘I don’t have a knife’. Then he shot her.”

Amnesty International says Irsheid is one of several cases it has investigated in which Palestinians were deliberately shot dead by Israeli forces when they posed no imminent threat to life.

The group said a photo of her body shows a knife lying near the body.

However, Amnesty said that even if the girl had a knife in her possession, “eyewitness accounts indicate she was not posing a threat to Israeli forces when she was shot, and her killing is therefore absolutely unjustified”.

The Israeli army referred Al Jazeera’s request for comment to the foreign affairs ministry, which did not reply to the accusations of unjustified killings, only saying that this was “yet another instance in which Amnesty demonstrates a lack of interest in the Israeli victims of Palestinian terror”.

Saturday’s funerals came hours after yet another Palestinian was shot dead. Mahmoud Nazzal, 18, was accused of carrying out a stabbing attack at a checkpoint near Jenin, a city in the northern West Bank.

Since the start of the latest wave of violence in Israel and the Palestinian territories at the beginning of the month, 70 Palestinians have been killed by Israeli forces and settlers.

The dead include attackers, protesters and bystanders.

In some cases, the person shot was left bleeding to death on the ground, in violation of humanitarian law.

Nine Israelis have been killed in stabbing and shooting attacks.

Many of the attackers involved in alleged attacks come from Hebron.

It is a city where 500 settlers live protected by barbed wire and the army, surrounded by about 200,000 Palestinians.

The city has seen frequent clashes between Israeli forces and Palestinians protesting against the occupation.