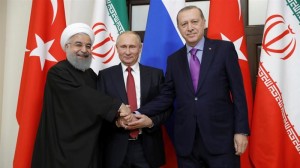 by Umut Uras : Turkey will host a trilateral meeting on the Syrian crisis between the presidents of Turkey, Russia and Iran on Wednesday amid significant developments happening on the ground in the seven-year civil war.

Russian President Vladimir Putin arrived in Ankara on Tuesday, followed by Iranian President Hassan Rouhani in the evening, as the leaders meet for the second time since November to discuss the Syrian situation.

Iran and Russia, which support the Syrian government in the crisis, and Turkey, which backs the moderate opposition, have been in close cooperation through a series of talks aimed at finding a solution to the Syrian conflict since last year.

Various so-called “de-escalation zones” were agreed among the three powers in Syria as a result of multiple rounds of talks throughout 2017.

The earlier talks took place in the Russian city of Sochi and Astana, the Kazakh capital.

Separately, Turkish-Russian relations have been increasingly well. The sides closed a deal in December 2017 for Ankara to buy S-400 air missile defence systems – despite NATO’s concerns – and Russia has been building Turkey’s first nuclear power plant.

According to Mensur Akgun, who leads the international relations department at Istanbul’s Kultur University, the three countries have gradually become closer over the Syrian issue as a result of their will to solve the crisis.

“As the influential actors on Syria, none of the three has interest in the continuation of the crisis and the US presence and influence on the war-torn country,” Akgun told Al Jazeera.

“They are trying to find a way out despite their differences, and keep the country’s territorial integrity while doing that.”

Tewfik Shuman, a Lebanese political analyst, said that the new efforts to resolve the Syrian crisis will have to take into account the new realities on the field.

“That is the opposition’s recent losses and Turkey’s role in northern Syria. This followed a deal that involved exchanging Eastern Ghouta for Turkey entering Afrin,” he told.

Syrian government forces are reportedly close to taking full control of the opposition stronghold of Eastern Ghouta as state media reports that fighters have been evacuating from the area near the capital Damascus.

The seizure of the Damascus suburb will mark a major development in President Bashar al-Assad’s efforts reclaim the lost territories in the seven-year civil war.

Turkish President Recep Tayyip Erdogan has condemned the humanitarian crisis happened in Eastern Ghouta in as a result of the siege imposed by Iran and Russia-backed Assad government on Eastern Ghouta various times.

Meanwhile, Turkish forces and Free Syrian Army (FSA) have reportedly taken full control of northwestern Syrian region of Afrin in late March from the US-backed Kurdish People’s Protection Unit (YPG) fighters as a result of an operation launched in February.

Russia removed its military observers from the region and opened the airspace of Afrin to Turkey for the operation that started in February to proceed.

Turkey considers the Kurdish Democratic Union Party (PYD) in Syria and its armed wing YPG to be “terrorist groups” with ties to the banned Kurdistan Workers’ Party (PKK).

The YPG has come to control large swaths of northern Syria, including Afrin, in the course of the Syrian war, particularly through fighting against the Islamic State of Iraq and the Levant (ISIL, also known as ISIS) group in an US-backed umbrella organisation named Syrian Democratic Forces (SDF). The US has logistically backed and trained the YPG forces in this process.

Turkey seeks to extend its military operation to other areas in northern Syria, which has been increasing the tensions between NATO allies Turkey and the US as there are US forces along with YPG ones in the areas Turkey seeks to target.

Akgun said that the interests of the three countries seem to overlap now over their views on the YPG presence in Syria.

“Although Russia has been fairly reluctant to grant the trump card [of YPG support] to the US, it seems to have picked Turkey over the YPG as we see in the result of the operation in Afrin,” Akgun told.

“Fighters linked to the PKK have been active in Iran as well, although not as much as Turkey. Therefore, Iran, like Turkey, does not want a strong YPG existence that might lead to an independent state there.”