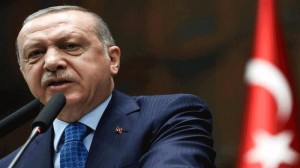 Turkey’s President Recep Tayyip Erdoğan has called a snap election on June 24, moving the date up from November 2019.

“Even though the president and government are working in unison, the diseases of the old system confront us at every step we take,” Erdoğan said in a speech in Ankara.

“Developments in Syria and elsewhere have made it urgent to switch to the new executive system in order to take steps for our country’s future in a stronger way… We discussed Mr. Bahçeli’s call with our relevant authorities. We came to the agreement that we should approach this early election positively,” he added.

The meeting between Erdoğan and Bahçeli began at 1:30 p.m. on April 18 at the presidential complex in Ankara. The meeting lasted for half an hour, according to a presidential source.

The two met a day after Bahçeli made a call on April 18 to hold presidential and parliamentary elections earlier than the scheduled date, saying “it has become too difficult to get to Nov. 3, 2019 with stability and equilibrium under the current circumstances, with Turkey suffocated by discussions about [the administrative] system.”

As Bahçeli’s MHP and the ruling Justice and Development Party (AKP) are in an alliance for the upcoming elections, where shift to an executive presidential system is due to go fully into effect, Bahçeli’s move prompted questions about whether his call was a joint decision of the alliance.

“A meeting between [Justice Minister] Abdulhamit Gül and Bahçeli was scheduled before [the MHP leader’s call]. It was interpreted as a meeting for the snap elections only after Bahçeli’s statements,” AKP spokesperson Mahir Ünal said on April 18 in a televised interview on private broadcaster Habertürk TV.

“There isn’t any secret plan,” Ünal added, saying a decision concerning snap elections will be “made after bilateral assessments.”

He stressed that “there isn’t any decision given yet,” adding that the parties’ related bodies will discuss the issue following the leaders’ meeting.

“Our president will meet lawmakers tomorrow [April 19]. The [AKP] has always been sensitive about elections being held on time,” Ünal said.