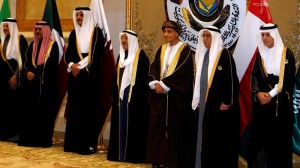 A Gulf summit that was supposed to take place at the beginning of April in Washington, DC has been postponed to September, a number of United States officials said.

According to Reuters news agency, the decision came as a result of US President Donald Trump’s busy schedule of diplomatic meetings, and the absence of a secretary of state, until CIA director Mike Pompeo is officially sworn in.

Some US officials said that the delay was also an indication that Washington had not yet made progress to end the Gulf crisis.

The leaders of Qatar, Saudi Arabia and the United Arab Emirates were meant to meet on April 1 for the first time since diplomatic sanctions on Doha were imposed last year by the aforementioned countries including, Bahrain and Egypt.

The blockading Arab quartet had cut off ties with Qatar, accusing it of supporting “terrorism” and regional rival Iran. Qatar has denied the allegations

One US official said there was a general consensus that it would be better to postpone the summit after the month of Ramadan, or beyond mid-June, according to Reuters.

The same source added that the summit was discussed during the visit of the Saudi Crown Prince Mohammed bin Salman to Washington, and that there were developments on starting discussions.

“There is a movement to start a dialogue and allow more time for the summit,” the official told Reuters.

A spokeswoman for the US National Security Council said that Trump is committed to resolving the Gulf crisis this month, and that the US-Gulf summit was not linked to the Gulf crisis.

In a statement, the White House said Trump and the Emir agreed on the importance of regional unity to address security threats.

“The leaders discussed Iran’s increasingly reckless behaviour in the region and the threat it poses to regional stability,” the statement read.

The statement also said that Trump thanked the Emir for Qatar’s continued commitment to counter terrorist financing and extremism.

Trump then contacted Saudi King Salman bin Abdulaziz Al Saud, and stressed the importance of resolving the Gulf crisis in order to restore the unity of the Gulf Cooperation Council (GCC), to safeguard the security of the people in the region.