What are the 10 stages of genocide? 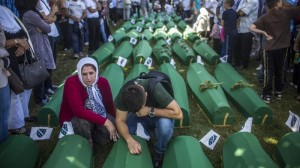 July 11 marks the 24th anniversary of the Srebrenica genocide, the worst atrocity on European soil since the Holocaust.

But what led to the massacre?

Genocide is not committed by a small group of individuals, rather a large number of people and the state all contribute to genocide.

At each stage preventive measures can stop the situation from deteriorating further, Stanton noted.

Here is how Stanton’s 10 stages – and Halilovic’s eleventh - relate to the Srebrenica genocide:

The idea of a Greater Serbia (including the territories of Bosnia, Kosovo, Croatia, Montenegro and other neighbouring countries) dates back to the 19th century and was revived following the death of Yugoslav leader Josip Broz Tito in 1980.

With the decline of the Communist bloc, Serbian President Slobodan Milosevic and Serbian nationalists saw a chance to mobilise the masses in support of establishing a homogenous Serbian state.

In Milosevic’s famous address to a crowd in Belgrade in 1989, he presented himself as the saviour of Serbdom and Europe.

It enforced the notion of “us [Serbs] vs them”. Bosniaks were typically called Turks, Balije (a slur for a Bosnian Muslim) and branded as terrorists and Islamic “extremists”.

Many Serbs dehumanised Bosniaks, regarding them as little more than Muslims who posed a threat to the Serbian hegemonist project.

“In order to mobilise domestic public opinion against the Muslims and to justify future acts against them in the eyes of the West, the Serbian leadership needed an image of Islam as a totalitarian, inherently violent, and culturally alien system on European soil,” writes Fikret Karcic, professor at the University of Sarajevo, in his book - Distorted Images of Islam: The case of former Yugoslavia.

“Such a distorted image had been provided by some influential Serbian orientalists, the Orthodox Church, and some historians.”

A plan to destroy Bosnia and “completely exterminate its Muslim people” was drawn up as early as the 1980s by the General Staff of the Yugoslav People’s Army, according to Vladimir Srebrov, a politician who co-founded the SDS party with convicted Bosnian Serb war criminal Radovan Karadzic.

Known as the famous RAM (frame) plan, its aim was to carve up Bosnia into a Greater Serbia and a Greater Croatia.

In the plan, the officers explained how artillery, ammunition and military equipment would be stored in strategic locations in Croatia and Bosnia.

A secret police force was planned for arming and training local Serbs to create police and paramilitary units in Bosnia.

One document, written by the army’s special services including experts in psychological warfare, held in the most effective way to create terror and panic among the Bosniak population – by raping women, minors, and even children.

Serbian and Bosnian Serb media regularly broadcasted polarising propaganda, to dehumanise victims and marginalise the opposition to the war.

In one case, while Serb forces held Sarajevo under siege, state-run Belgrade TV aired a false story intended to fuel hatred, including the line: “Muslim extremists have come up with the most horrifying way in the world of torturing people. Last night they fed the Serb children to the lions in the city’s zoo.”

This was reported on the evening news and was watched by several million viewers.

Organised from Belgrade, Serbia, weapons were distributed to the Serb population by the truckload throughout 1990 and 1991 in Bosnia.

“Weapons and military equipment were even flown in by military helicopters to Serbian military officers. It is said that by the end, almost no Serbian house was without an automatic gun,” according to a UN report from 1994.

“The pretext for the arms deliveries and the rearmament was that this was necessary for the defence against ‘the enemies of the people’ – the Muslim extremists.”

Across Bosnia, influential, intellectual Bosniaks were often among the first to be executed, with their names drawn up in death lists.

As Serb troops arrived in each town, they killed non-Serbs, often after torturing them. Bosniak properties were confiscated.

A woman walks through the cemetery in Potocari, Bosnia and Herzegovina, Wednesday, March 20, 2019 [Marko Drobnjakovic/AP]

In Prijedor, a city in western Bosnia, Bosniaks were forced to wear white armbands to be clearly identified and tie white flags to their doors.

Men in Prijedor were deported to concentration camps where they were tortured, starved and killed.

Others living under siege, such as in Sarajevo and Mostar, starved while being targeted by snipers and heavy shelling.

Srebrenica, which was known as the world’s biggest detention camp, was under siege for three years, before it fell to Bosnian Serb forces in July 1995. Serb troops separated boys and men aged between 12 and 77 from the rest of the population.

“At this stage, a genocide emergency must be declared,” according to Stanton’s list.

On July 11 at 16:15 General Ratko Mladic (now a convicted war criminal) entered Srebrenica with Serb forces, claiming the town for Bosnian Serbs. Strolling through the streets with the TV cameras rolling, Mladic announced that there will be “revenge against the Turks”.

Panicked residents in the enclave fled to the UN Dutch Battalion base only to find that the 400 lightly-armed peacekeepers were unable to defend them. Serb forces had inherited much larger resources of the former Yugoslav army, the fourth largest in the world at the time.

On that day, thousands of Bosniak men attempted to escape through the woods and mountains, forming a column and hiking some 100km in an attempt to reach free territory controlled by the Bosnian army.

The journey was known as the death march, as they were ambushed, shot at and attacked by Serb forces. Less than a quarter of them survived.

Over the course of six days, more than 8,000 Bosniak Muslim were killed. Women and small children were deported.

In an attempt to conceal the killings, Serbian forces transported the dead bodies with bulldozers and trucks and buried them in numerous locations, leaving the victims’ remains fragmented and crushed.

Human bones can be found as far as 20km apart, making it difficult for families to give their loved ones a proper burial.

According to an Al Jazeera Balkans poll from 2018, 66 percent of Serbs in Republika Srpska deny the genocide.

Genocide denial is common in academic and political circles in Republika Srpska and Serbia. The genocide is vehemently denied by politicians including Milorad Dodik, the current chairman and Serb member of Bosnia’s tripartite presidency.

“[Denial] is among the surest indicators of further genocidal massacres,” Stanton wrote.

Triumphalism is, according to Bosnian-Australian anthropologist Hariz Halilovic, the eleventh stage of genocide which is particular to Bosnia’s case.

According to the 2018 poll, 74 percent of Serbs in Republika Srpska consider Bosnian Serb convicted war criminal Radovan Karadzic to be a hero.