The importance of time in Islam 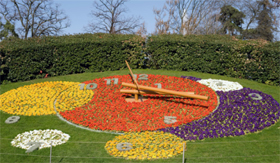 By Aisha Stacey : What is time, what causes it?  Is it a dimension, can you slow it down or speed it up?  When we think of time we tend to think of the ways in which we measure the passing of time, a clock or watch, or we think of a measured interval of time such as an hour or minute.  Humankind has always been concerned with time, the passage of time, the measurement of time, and the scientific qualities of time.  We talk about time travel, the relativity of time, the direction of time and wheel of time.

There are theories and concepts of time and it is studied in religion, philosophy and science.  Time even has economic value.  Time is money.  Time has social and personal importance; we use our concept of time to place events appointments and milestones in sequence.  We order our lives around time, in Islam lives are structured around the daily prayers.  In the 11th century, Avicenna doubted the existence of physical time, arguing that time exists only in the mind due to memory and expectation.  Islamic and Christian theologians adopted the idea that time is linear.  Verses from the Bible tell us there is a time for everything.  “To everything there is a season, and a time to every purpose under the heaven” (Ecclesiastes 3:1)[1]

Both the Quran and the traditions of Prophet Muhammad, may the mercy and blessings of God be upon him, make it clear that Islam considers time to a very valuable resource.  Believers are encouraged to be conscious of time, to recognise its importance and to organise it wisely.  If human beings do not waste or abuse time, but rather think of it as a blessing from God then they have every reason to hope for success both in this life and in the hereafter.

Prophet Muhammad instructed his followers and thus the believers to know and value the importance of time in the following traditions.

Humankind  will remain standing on the Day of Resurrection until he is asked about four things: his life and how he spent it, his youth and how he used it up, his property and how he acquired and managed it and his knowledge and how he utilized it.

There are two of God’s favours that are forgotten by many people; health and free time.[3]

Islam teaches us that time passes quickly and can never return, it is irretrievable.  It is also the most precious gift that humankind possesses and can be taken from us at any given moment.  God is the Giver but He is also the Withholder.  Time passes swiftly and God reminds us in the Quran that the months and years pass but when we are standing before Him on the Day of Judgement our time on earth will seem as though we had lived, dreamed and worshipped for less than a day.

A believer should not waste precious time on things that will not bring him closer to his Creator.  Actions that do not contain a benefit for himself, his society or humankind in general are usually wasted actions, wasted time.  Islam categorised things according to their level of importance.  The first Muslims used to capture and use every single second of their time. Create

Thabit Al-Bunany said, “When my father was on his deathbed, I went to assist him in pronouncing the testimony that there is no god worthy of worship but Allah, but he said, ‘Son! Leave me alone, for I have recited all my supplications five times and I’m on my sixth cycle now.”

Those who understand the value of time should make an effort to organise their time and make realistic plans.  The entire life of a believer can be considered worship when that person is conscious of doing only what is pleasing to God.  Religious obligations must be a first priority, however God is generous and time that seems so fleeting when we are flittering it becomes filled with blessing when we are using it to please our Creator.

The words of God in the Quran and the message of Prophet Muhammad to the believers are clear, we, humankind are told to be conscious of time.  God reminds us that life in this world is but temporary and we do not know our appointed time of death.  As believers we must never waste or abuse time, rather we must value it as a blessing from God.  We must all understand that wasting even a single moment is an opportunity gone, never to return.  When our time in this world is up, there is no going back and we will be held accountable for all that we do. Time is indeed precious!