80 percent of Ramadi in ruins after fighting 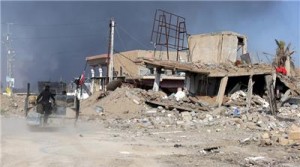 Months of fighting and the recent pitched battle to take Iraq’s Ramadi from ISIL have levelled most of the key city as officials warned it was too soon for civilians to return after it was recaptured.

Local official Eid Amash said 80 percent of Ramadi, the provincial capital of Anbar, has been destroyed in the battles between Iraq’s army – backed by US air strikes – and the Islamic State of Iraq and the Levant group.

Amash, a spokesman for Anbar’s provincial council, told the Kurdish media network Rudaw that some districts of Ramadi had yet to be cleared of ISIL fighters.

Iraqi forces declared victory on Sunday after wresting back control of the city’s central government complex.

ISIL fighters laid thousands of explosive devices across Ramadi as part of their defence strategy against an offensive that was launched on December 22 by elite Iraqi troops.

The city was lost to ISIL in May. The US-led coalition carried out more than 600 air strikes in the area since July.

Ibrahim al-Osej, a member of the Ramadi district council, said there was “extensive destruction in the city as a result of terrorist activity and military operations”.

He said that figure would grow because assessments could not be immediately carried out in some neighbourhoods that hadn’t been cleared of land mines.

“All water, electricity, sewage and other infrastructure – such as bridges, government facilities, hospitals and schools – have suffered some degree of damage,” Osej said.

Major Michael Filanowski, a US operations officer, said five bridges in Ramadi – which lies on the Euphrates  and is 100 kilometres west of Baghdad - have suffered various levels of destruction.

Civilians began fleeing Ramadi two years ago when ISIL started moving in and tensions escalated. The exodus continued until this week.

Residents of Anbar account for more than one third of the 3.2 million people displaced by fighting in Iraq since the start of 2014, according to the International Organization for Migration.