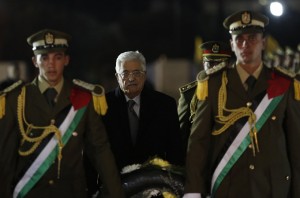 Palestinian President Mahmoud Abbas has signed documents necessary for joining international organisations including the International Criminal Court (ICC) at a meeting in Ramallah.
President Abbas signed the documents on Wednesday, a day after a UN Security Council failed to pass a resolution that had aimed to set a deadline for Israel to end its occupation of territories sought by the Palestinians.
The decision sets the stage for filing a war crimes case against Israel for its actions in Gaza. Irael’s President Benjamin Netanyahu vowed to take action following the announcement.
“The one who needs to fear the International Criminal Court in the Hague is the Palestinian Authority, which has a unity government with Hamas, a terror organisation like (ISIL) which commits war crimes,” Netanyahu said in a statement.
“We will rebuff this effort to impose a diktat on us, just as we rebuffed the Palestinian efforts in the UNSC.”
US State Department spokesman Edgar Vasquez said America strongly opposed the move and warned it would be “counter-productive and do nothing to further the aspirations of the Palestinian people for a sovereign and independent state.”Potentially Israeli leaders and Palestinian leaders could find themselves in court.
“They can ask for [ICC] investigations, not just from day they signed the statute, but a retroactive investigation into past events.
“There are some legal doubts as to what will be covered, but most legal experts believe fighting in Gaza this summer could be included.”
Abbas had warned that if the UN resolution failed, he would resume a Palestinian campaign to join international organisations to put pressure on Israel.
The signed statute will now be passed to the UN’s secretary-general, Ban Ki-moon, who will consider the application to join the ICC.
Abbas’ decision is expected to trigger a harsh response from Israel.
Israel says all disputes should be resolved through peace talks, and such actions are aimed at bypassing negotiations.
Abbas also signed a raft of about 20 other treaties, aligning Palestine with various international organisations.