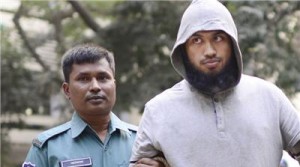 Two students have been sentenced to death for the 2013 murder of an atheist blogger in Bangladesh, the first convictions in a series of killings targeting secular writers.

Haider was hacked to death by machete-wielding attackers in February 2013 near his home in Dhaka’s Mirpur neighbourhood.

One of the two students, who attended one of the country’s top universities, is on the run and was sentenced in absentia.

The fast-track court sentenced six other people to different prison terms, including a life sentence for 23-year-old Maksudul Hasan.

Defence lawyer Mosharraf Hossain Kajal said that they would go to the higher court to challenge the verdict. He told DPA news agency that the prosecution had failed to prove the allegations against his clients.

Law and Justice Minister Anisul Huq said that the investigators had been working hard to bring perpetrators of attacks on other bloggers to justice.

The Committee to Protect Journalists, a New York-based watchdog, welcomed the court ruling.

“The convictions in the murder of Ahmed Rajib Haider mark a long overdue but encouraging first step in addressing the violence directed against bloggers in Bangladesh,” CPJ Asia Research Associate Sumit Galhotra said in a statement.

“If Prime Minister Sheikh Hasina’s government is committed to protecting the country’s independent voices, it must act decisively to deliver justice in the murders of other bloggers and ensure the protection of those who remain at risk.”

Four more secular bloggers and a publisher have been killed this year, triggering protests and claims that the government is not doing enough to protect dissident writers and activists.

Local groups have claimed responsibility for murdering the bloggers, branding them enemies of Islam.