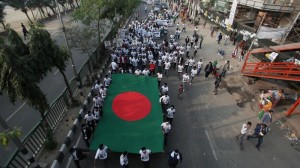 by Saif Khalid: Millions of Bangladeshis are set to vote in Sunday’s parliamentary elections amid concerns expressed by rights bodies over “restrictive electoral environment”.

More than 104 million registered voters will exercise their franchise to elect 300 representatives to parliament, known as Jatiya Sangshad.

A total of 1,841 candidates from the Grande Alliance, led by the ruling Awami League(AL) party, and the opposition alliance, led by the Bangladesh Nationalist Party (BNP), are competing in the elections that have been marred by violence and accusations of intimidation.

Around 600,000 security personnel, including the army, have been deployed across the country in a bid to contain violence during the 11th general elections.

The Internet has been completely shut down until midnight of Sunday to prevent “rumours”, the English language newspaper, the Daily Star, reported.

Electronic Voting Machines will be used for the first time in select constituencies.

“If we find any negligence or insincerity during poll-time duty, we will take legal action against them after investigation,” the CEC said during a press conference at the Nirbachan Bhaban in the capital, Dhaka.

Rights organisations have criticised the government for “cracking down on civil society, the opposition and the media”.

A statement issued by 16 human rights organisations, including Asian Human Rights Commission and Asian Network for Free Elections (ANFREL), said on Saturday that at least five persons have been killed and 2,682 others injured in election-related violence since December 10.

“These attacks are meant to instil fear in the minds of Bangladeshi voters, and thus undermining the prospects of a level electoral playing field,” the rights bodies said.

Golam Mawla Rony, a BNP candidate in the polls, said he was confined in his house because ruling party members would not let him go out.

Rony, who is running from Patuakhali 3 constituency in the country’s south, said he was attacked on Friday by AL members when he ventured out for prayers.

“One hundred of my supporters have been arrested. Police and Awami League people are going from house to house and threatening BNP supporters to not come out on Sunday to vote,” Rony told over the phone.

“The situation is terrifying. I could never imagine that such a situation can exist during an election,” Rony said.

Al Jazeera reached out to police to seek their response, but could not receive a reply until the time of publication.

Gowher Rizvi, the International Affairs adviser to Prime Minister Sheikh Hasina, said the opposition’s claims of police harassment and restrictions on their movement are “exaggerated”.

“A lot of these things are exaggerated. It’s despicable; it’s really worrying that there is violence. But if you look at the last seven days, seven people have been killed – all from Awami League. This is real violence, people have lost their lives,” he told.

He asked the media to investigate the veracity of these claims.

“Yes there are some isolated incidents, I have no doubt. It has happened in the past, it’s happening now. But do not accept it without corroboration,” he said.

Afsan Chowdhury, a political analyst and a journalist, said we “haven’t had such a conflict-ridden election before”.

“This election has the highest stake ever. I have not seen an election, which is so intense,” he said.

“Interestingly, this is the first election under a civilian government in 10 years, since the 2008 election was under martial law and the 2014 election was boycotted by the opposition.”

Prime Minister Sheikh Hasina, who has become the South Asian nation’s longest-ruling leader, is seeking a third consecutive term on the back of high economic growth during her 10-year rule.

“I request the voters to cast their votes, I request the candidates to collect the result-sheets having the signatures of presiding and returning officers,” Hasina was quoted as saying by the Daily Star.

Hasina has led the ruling AL party, founded by her father, Sheikh Mujibur Rahman, the country’s founding leader, since 1981.

She has been globally hailed for her handling of the Rohingya crisis last year when about one million Muslim minority sought refuge in Bangladesh fleeing a military offensive in Myanmar.

Her tenure also saw the beginning of the controversial War Crimes Tribunal trial against those involved in atrocities committed during the country’s liberation war against Pakistan in 1971.

Professor Chowdhury, who teaches at BRAC University, said: “Hasina’s achievements are quite extensive”.

“Nobody has achieved as much as she has done. She has carried out socio-economic development,” he said. “The lower class has benefited most under her. This is her great power base and that has not changed.”

“BNP’s support base is those that are unhappy with the Awami League. It is the anti-incumbency party. It does not have its own support base. Not a significant one,” he said.

The opposition fight was no match to the high-decibel campaign led by the ruling AL party in the absence of the BNP leader and former Prime Minister, Khaleda Zia, who is serving a 17-year jail term for corruption.

Her BNP party forged an alliance, Jatiya Oikya Front (National Unity Front), with a former Hasina ally and a well-respected jurist, Kamal Hossain, to mount a challenge to the prime minister.

On the eve of the elections, Hossain called on his supporters not to be intimidated by threats.

“Vote tomorrow. Don’t let them intimidate you. Evil forces will flee before you. They can’t fight people’s strength,” said Hossain, convenor of the Jatiya Oikya Front.

Jobs a major agenda for youth

Employment will be a big agenda on the minds of the young voters, who form nearly one-fifth of the registered voters.

The youth joblessness stands at 11 percent as compared to the overall unemployment rate of 4 percent.

Earlier this year, thousands of students hit the streets against government quota in jobs. The government was forced to agree to their demands.

“There has been an abuse of power by the police and Awami League leaders at the grassroots level,” said Ismail Zaman, a BNP supporter whose name has been changed on his request.

But Mohammad Yusuf, a student of Jahangir Nagar University and an AL supporter, disagrees.

“The big achievements of Sheikh Hasina have been poverty reduction, no corruption in appointments in government jobs and most notably, humane treatment of the Rohingya refugees.”