China rejects US criticism of its treatment of Muslim minorities 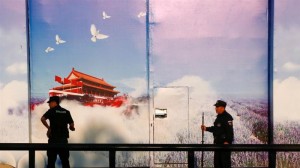 China’s foreign ministry said on Thursday a US State Department report critical of its human rights record was filled with “ideological prejudice and groundless accusations”.

The US report slammed human rights violations in China, saying the sort of abuses it had inflicted on its Muslim minorities had not been seen “since the 1930s”.

US Secretary of State Mike Pompeo highlighted abuses in Iran, South Sudan, Nicaragua and China in the department’s annual Country Reports on Human Rights Practices, but told reporters that China was “in a league of its own when it comes to human rights violations”.

“Today, more than one million Uighurs, ethnic Kazakhs, and other Muslims are interned in re-education camps designed to erase their religious and ethnic identities,” he said.

“Rounding up, in some estimations … in the millions of people, putting them into camps, and torturing them, abusing them, and trying to basically erase their culture and their religion and so on from their DNA. It’s just remarkably awful.”

“It is one of the most serious human rights violations in the world today,” he said.

“For me, you haven’t seen things like this since the 1930s,” he said, apparently referring to the policies of persecution in Hitler’s Germany and Stalin’s Soviet Union.

China had initially denied the existence of the camps, Kozak said, adding that its current justification that they were for voluntary labour training “does not match the facts.”

“But at least we’re starting to make them realize there is a lot of international scrutiny on this,” he said.

Xinjiang Governor Shohrat Zakir said on Tuesday that China was running boarding schools, not concentration camps, in the country’s far western region as the US ambassador for religious freedom called the situation there “completely unacceptable” and said sanctions against Chinese officials under the Global Magnitsky Act remained a “possibility”.

The administration of President Donald Trump has weighed sanctions against senior Chinese officials in Xinjiang, including Chen Quanguo, the Communist Party boss there who, as a member of the powerful politburo, is in the upper echelons of China’s leadership.

Beijing has warned of retaliation if Washington were to target Chen and the administration has yet to act despite complaints from US lawmakers.

The State Department report said Chen had replicated in Xinjiang policies similar to those credited with reducing opposition to Communist Party rule in Tibet, where he was previously stationed.

The report said that in the past year, China had significantly intensified its campaign of mass detention of members of Muslim minority groups in Xinjiang.

It said authorities there were reported to have arbitrarily detained between 800,000 and possibly more than two million Uighurs, ethnic Kazakhs and other Muslims in camps, with the aim of erasing religious and ethnic identities.

The report says children of the detained have been placed in “orphanages or boarding schools, or “child welfare guidance centres”, where they were forced to shout patriotic slogans, learn Mandarin Chinese, and answer questions about their parents’ religious beliefs and practices.” It said it did not know how many children were affected.

Iran also came in for harsh criticism while rival Saudi Arabia, cited for many identical domestic rights abuses as well as the murder of US-based journalist Jamal Khashoggi, was given easier treatment.

Pompeo said the Iranian government had killed more than 20 people and arrested thousands without due process for protesting for their rights “continuing a pattern of cruelty the regime has inflicted on the Iranian people for the last four decades”.

Tehran was also cited for contributing to rights abuses in Syria through its support for President Bashar al-Assad, and in Yemen for backing the Houthi rebels battling for control of the country.