Dawah: An obligation upon Muslims 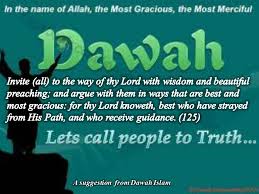 Abu Abdel Kareem : An important matter for Muslims to realize is that Dawah is an obligation upon them. Allah (subhanahu wa Ta`ala) says in the Quran: “Invite to the Way of your Lord (i.e. Islam) with wisdom and fair preaching, and argue with them in a way that is better. Truly, your Lord knows best who has gone astray from His Path, and He is the Best Aware of those who are guided.” (Quran, an-Nahl: 125) “Let there arise out of you a group of people inviting to all that is good, enjoining al-ma`roof (i.e. Islamic Monotheism and all that Islam orders one to do) and forbidding al-Munkar (polytheism and disbelief and all that Islam has forbidden). And it is they who are successful.” (Quran, Aal Imraan: 104) The second verse may seem to be restricting the general obligation given in the first verse, but a close look at the Sunnah of the Prophet Muhammad (p.b.u.h.) reveals that calling to Allah is an individual obligation, rather than a collective one. The Prophet (p.b.u.h.) has said: “Convey from me, even one verse.” (Bukhari) Conveying the message therefore does not require a high level of scholarship, it is in fact a responsibility of each and every Muslim, according to his or her ability.

The obligation is further emphasized by the following verse which explains that not conveying the message – hiding knowledge – is disobedience to Allah that causes Allah’s curse to descend upon such people, which shows that such a sin leads to the Hellfire. “Verily, those who conceal the clear proofs, evidences and the guidance, which We have sent down, after We have made it clear for the people in the Book, they are the ones cursed by Allah and cursed by the cursers.” (Quran, al-Baqarah: 159) In the same connection, the Prophet (p.b.u.h.) has stated, “Whoever hides knowledge, Allah will brand him with the branding iron from the hellfire.” (Ahmad) Calling people to Allah also means completing our own worship, the reason for which we are created.

It is one of the noblest acts that entails a high reward. “And who is better in speech than he who says: ‘My Lord is Allah (believes in His Oneness),’ and then stands straight (acts upon His Order), and invites (people) to Allah (Islamic Monotheism), and does righteous deeds, and says: ‘I am one of the Muslims.’” (Quran, Fussilat: 33) With regards to the reward, the Prophet (p.b.u.h.) has said: “Whoever guides (another) to a good deed will get a reward similar to the one who performs it.” (Sahih Muslim) Also, “By Allah, if Allah were to guide one man through you it would be better for you than the best type of camels.” (Bukhari, Muslim)