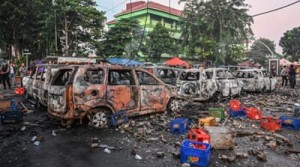 by Febriana Firdaus: At least six people were killed as protests continued on Wednesday after the official results of last month’s election confirmed incumbent Joko “Jokowi” Widodo as president with 55 percent of the vote.

The demonstrators were largely supporters of presidential candidate and former military general Prabowo Subianto and they claimed widespread fraud took place before, during and after the election.

Major roads and public transport routes were shut in the centre of the capital Jakarta, with more than 20,000 police deployed to protect vital installations and stop protests spreading on their second day.

Thousands of protesters thronged near the Elections Oversight Body on Jakarta’s main thoroughfare, Jalan Thamrin, in the morning and early afternoon with crowds growing by the hour.

Police shut off access to the office with rolls of barbed wire and heavy cement barricades.

“We are here because we want a president who is honest and fair,” said Lely Simanjuntak, a Prabowo supporter from east Jakarta. Lely arrived at the protest with friends from Surabaya, about 800km from the capital.

“We don’t care who the president is,” she told. “But as Indonesians, we must care about our elections and make sure they are just and valid.”

At 1:30 pm local time (05:30 GMT), the coordinating minister for political, legal and security affairs, Wiranto, announced that social media apps would be blocked in certain areas of Jakarta to stop the spread of fake news.

Opposition supporters claimed the men were shot by riot police – who denied the allegations. Showing their weapons to Al Jazeera, police officers said their guns were filled with blanks and not live ammunition.

But some wounds appeared to show otherwise.

“I was shot by riot police. Please help,” Sumardi, 19, shouted to a nurse on the scene while clutching his neck.

Sumardi, who is not from Jakarta, joined the protests after seeing invitations on social media and decided to attend because he believed he saw fraudulent behaviour at his polling station.

“They said we voted for Jokowi, but we didn’t,” he said indignantly. “I can’t accept the official results.”

President Jokowi said late on Wednesday that the situation was now under control.

“I will not tolerate anyone disrupting the security …or unity of the country, or those who disrupt the democratic process,” he told reporters at the palace.

A group of women from Manado, who flew in to attend the rally, said they were angry at the announcement that the incumbent Jokowi was named the winner of April’s presidential election. They claimed fraud was rampant during the election.

“The ballot boxes were already marked for certain candidates before they arrived at the polling stations,” one of the women explained as they waited outside the Sarinah shopping centre for the crowd to grow.

She refused to be named for fear of repercussion from her workplace.

“Valid ballot papers were burned and not counted, many fake voter names were added to electoral lists, and the total number of votes was more than 110 percent,” she added. “The fraud was massive.”

The Elections Oversight Body and the General Elections Commission have denied that major fraud took place.

In nearby Petamburan, where three protesters died overnight, police were working to secure the area.

The protesters threw rocks and set car tyres on fire and the police responded with water cannon.

Despite the government’s attempts to restrict the spread of hoaxes on social media, Al Jazeera saw multiple pieces of fake news being shared.

Some alleged members of the riot police were from China, an attempt to delegitimise Jokowi’s government, while other graphics showed photos of men bleeding on the ground, claiming they had been shot.