FM Javad Zarif: We don’t want war, and no one can confront Iran 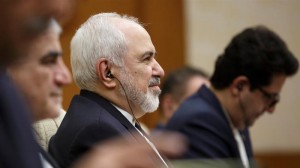 Iranian Foreign Minister Mohammad Javad Zarif says he does not believe a war will break out in the region as Tehran does not want a conflict and no country has the “illusion it could confront Iran”, state news agency IRNA reports.

Concerns about a possible conflict have flared since the White House ordered warships and bombers to the Middle East to counter an alleged, unexplained threat from Iran.

Earlier this week the US also pulled some diplomatic staff from its embassy in Baghdad following weekend attacks on four oil tankers off the coast of the United Arab Emirates (UAE).

“There will be no war because neither we want a war, nor has anyone the idea or illusion that it can confront Iran in the region,” Zarif told IRNA before ending his visit to Beijing.

Meanwhile, Saudi media reported that the kingdom and a number of Gulf states have agreed to a request by the US to redeploy its military forces in Gulf waters and territories.

According to the reports, the approval came on the basis of bilateral agreements between Washington and Gulf countries.

The motive for redeployment, according to the Saudi reports, was to deter Iran from any attempt to escalate the situation militarily, not to engage in a war with it.

This all takes root in US President Donald Trump’s decision last year to withdraw the US from the 2015 nuclear accord between Iran and world powers and impose wide-reaching sanctions.

The move came even as the International Atomic Energy Agency (IAEA) has verified that Tehran has upheld its obligations under the deal.

On the Iranian side, the Guardian newspaper reported in an exclusive report on Thursday that Tehran had ordered its militias in the Middle East to prepare for a proxy war.

The deputy commander of Iran’s Revolutionary Guards, Mohammad Saleh Jokar, said on Friday that his country’s missiles could easily reach US warships anchored in the Gulf and the rest of the region in case of war.

On the other hand, a senior Iranian legislator, Hashmatullah Falahat Pishe, called for an Iranian-American dialogue in Iraq or Qatar, to de-escalate tensions with Washington.

Inside the US, congressional sources on Saturday said officials from Trump’s administration would make secret statements about the situation with Iran this week, after politicians from the Democratic and Republican parties asked for more information.

Members of Congress have complained for weeks that Trump’s administration has not given them enough information about the current tension with Iran, and some Republicans say they have not been briefed on the issue.

Relations between Washington and Tehran have been strained in recent days after Trump issued a resolution to try to stop Iran’s oil exports completely, and bolstered the US military presence in the Gulf in response to what officials in its administration said were “imminent” Iranian threats to Washington’s interests in the region, without explaining the nature of the alleged threat.

Adding to the rhetoric, US diplomats warned commercial airliners flying over the wider Gulf of the risk of being “misidentified” amid the heightened tensions.

The warning relayed by US diplomatic posts from the Federal Aviation Administration (FAA) underlined the risks the current tensions pose to a region crucial to global air travel.