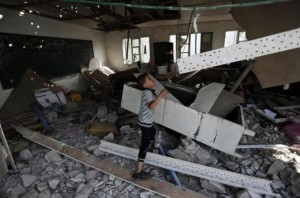 The UN and the US have announced that Israel and Hamas have agreed to an unconditional 72-hour humanitarian ceasefire to begin on Friday morning.
In a joint statement, UN Secretary-General Ban Ki-moon and United States Secretary of State John Kerry the two sides would cease fire at 8am local time (05:00 GMT) and that Israelis and Palestinians would enter talks in Cairo.
The statement said: “This ceasefire is critical to giving innocent civilians a much-needed reprieve from violence.
“During this period, civilians in Gaza will receive  urgently needed humanitarian relief, and the opportunity to carry out vital functions, including burying the dead, taking care of the injured, and restocking food supplies.
“Overdue repairs on essential water and energy infrastructure could also continue during this period.
“Israeli and Palestinian delegations will immediately be going to Cairo for negotiations with the government of Egypt, at the invitation of Egypt, aimed at reaching a durable ceasefire.
“The parties will be able to raise all issues of concern in these negotiations.”
As of late Thursday, Gaza’s ministry of health put the death toll of Palestinians at 1,437, with more than 8,100 wounded.
Fifty-six Israelis, nearly all of them soldiers, have died since Israel launched its offensive against Gaza on July 8.

Earlier on Thursday, the US said there was “little doubt” Israeli bombs killed 19 people at a UN shelter in Gaza on Wednesday, in its strongest condemnation yet of Israeli attacks on civilians in the Palestinian enclave.
Josh Earnest, a White House spokesman, said on Thursday that the shelling of the school in Jabaliya was “totally indefensible”.
Earlier on Thursday, Benjamin Netanyahu, the Israeli prime minister, had said his country was determined, regardless of ceasefire efforts, to complete the destruction of tunnels that Palestinian fighters have built under the Gaza-Israel border.
“Until now, we have destroyed dozens of terror tunnels and we are determined to finish this mission – with or without a ceasefire,” he said.
The UN’s top rights and refugee officials condemned Israel’s bombardment of Gaza and warned of a major humanitarian crisis, with almost half of Palestinians now refugees in their own territory.
Navi Pillay, the UN human rights commissioner, said that Israel had attacked homes, schools, hospitals and UN premises in apparent violation of the Geneva Conventions.
Valerie Amos, the UN’s humanitarian aid coordinator, told a UN security council meeting that there were now 440,000 refugees fleeing fighting in Gaza, and that hundreds of thousands more were without basic services, power and food.