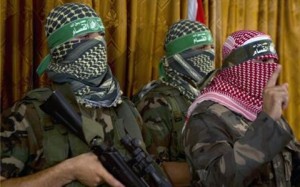 The leader of the military wing of Hamas has said there will be no truce in Gaza unless Israel lifts its siege, in comments broadcast hours after an attempt at a 24-hour ceasefire stalled with disagreements.
In an audio statement on Tuesday, Qassam Brigades commander Mohammed Deif said the ceasefire “will not take place unless the siege is lifted and the border crossings are all open”.
Deif said the “balance of power” had changed during Israel’s three-week invasion of Gaza, which began with air raids before Israel sent in ground forces, first to stop Hamas rocket fire and then to destroy tunnels dug by fighters.
“What the air force and your artillery shelling has failed to accomplish, will not be accomplished by ground forces,” said Deif. “You are sending your soldiers to a definite slaughterhouse, God willing.”
“The Zionist entity will not know security unless the Palestinian people live in peace.” Deif’s comments were released hours after the Palestinian Liberation Organisation said all factions had agreed to offer a 24-hour humanitarian truce – and were prepared to send a unified delegation to Egypt to discuss a full ceasefire agreement.
However, the statement was quickly dismissed by Hamas and Israel.
Osama Hamdan, a Hamas spokesman in Beirut, Lebanon, said that the organisation welcomed the idea of a ceasefire “but we need a guarantee that the Israelis will not violate that”.
Israel’s government spokesman Mark Regev told the AP news agency that the offer was “not serious” until Israel heard from Hamas directly.
Israel cancelled a security cabinet meeting shortly afterwards.
Israel continues to pound the Gaza Strip. At least 100 Palestinians were killed on Tuesday, according to Gaza officials. The total Palestinian death toll in more than three weeks of Israel-Hamas fighting has exceeded 1,200.
On the Israeli side, 56 people have been killed. That figure includes two Israeli citizens and a Thai worker killed by rockets fired into Israel by Gaza fighters.