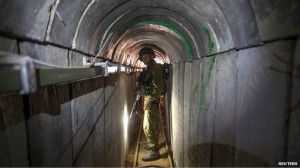 Israeli Prime Minister Benjamin Netanyahu said his country is determined, regardless of ceasefire efforts, to complete the destruction of tunnels that Palestinian fighters have built under the Gaza-Israel border.
In public remarks at the start of a cabinet meeting in Tel Aviv, he said he would not agree to any proposal that would not enable the army “to complete this important task for the sake of Israel’s security”.
“Until now, we have destroyed dozens of terror tunnels and we are determined to finish this mission – with or without a ceasefire,” Netanyahu said on Thursday.
Major General Sami Turgeman, chief of Israeli forces in Gaza, earlier said troops were “but a few days away from destroying all the attack tunnels”.
Netanyahu’s statement undermines ongoing diplomatic efforts to put an end to the Israeli offensive on the Gaza Strip which has entered its 25th day.
At least 13 people were killed on Thursday in Israeli air strikes on different areas across the coastal enclave, Al Jazeera’s correspondent reported.
The latest deaths bring the death toll of Palestinians killed in the offensive, which began on July 8, to at least 1,371, according to the health ministry in Gaza. More than 7,700 others have been reported injured.
Rockets fired from Gaza into Israel have so far killed two Israeli civilians and one Thai citizen. The fighting has killed 58 Israeli troops.
Israel says it launched its military campaign to stop rocket fire from Gaza towards Israel. Ground troops were sent in on July 17 to destroy what Israel says are sophisticated network of tunnels used by Hamas and affiliated groups.
UN human rights chief Navi Pillay on Thursday slammed Israel’s attacks on homes, schools, hospitals and United Nations facilities in Gaza.
She condemned what she said was Israel’s “deliberate defiance” of international law during the Gaza conflict.
“There appears to be deliberate defiance of obligations that international law imposes on Israel,” Pillay said.
She spoke a day after Israeli shelling on a UN-run school that was sheltering displaced families killed 19 people.
Source : Agencies