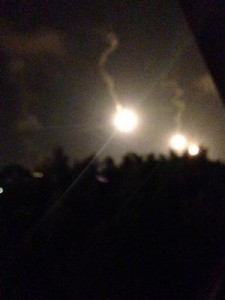 Israeli shells have struck a UN school in the Gaza Strip, killing at least 16 people and wounding scores more, after Israeli ground troops made a significant push into the territory amid Palestinian efforts to broker a 24-hour truce.
It was the second time in a week that a UN school sheltering hundreds of homeless Palestinians had been hit, with the latest violence pushing the Gaza death toll over 1,260.
Wednesday’s shelling hit the school in the Jabaliya refugee camp, Ashraf al-Qudra, Gaza’s emergency services spokesman, said, confirming reports of the casualties on the 23rd day of Israel’s military campaign.
The incident took the morning’s death toll to at least 35, in a conflict that has killed more than 1,258 Palestinians, according to the Gaza’s Health Ministry figures.
An official for UNRWA, the UN’s Palestinian refugee agency, told the AFP news agency that the shelling hit a bathroom and two classrooms inside the girls’ school.
Al Jazeera’s Imtiaz Tyab, reporting from Gaza’s Kamal Adwan hospital, where many of the injured were brought, put the number of wounded at more than 90.
“Looking around me I can see some with what appears to be shrapnel wounds and some with far more serious wounds,” he said.
He said people there did not know why Israel had hit the shelter, adding that the attack caused panic among people living in different UN-run shelters.
“As we were driving to the hospital, we saw families with many children leaving other UN schools. They feel insecure. There seem to be no safe shelter for them, not even in UN schools,” our correspondent said.
At least 180,000 Palestinians have sought shelter in about 80 UNRWA schools, according to UN refugee agency.
The Israeli army had begun heavy tank shelling in the area a couple of hours prior to the incident.

Violence shows no signs of abating despite an announcement by Palestinian factions that they were ready for a new Gaza truce and the US said Israel had sought help in calming the conflict.
At least 100 people were killed in Israeli bombardment on Tuesday and the only power station in Gaza was shelled.
John Kerry, US secretary of state, said on Tuesday that Benjamin Netanyahu, Israeli prime minister, talked to him “about an idea and a possibility of a ceasefire. He raised it with me, as he has consistently”.
Kerry also indicated that Netanyahu had said he “would embrace a ceasefire that permits Israel to protect itself against [Palestinian fighters'] tunnels and obviously not be disadvantaged for the great sacrifice they have made thus far”.
There was no Israeli government comment.
Yasser Abed Rabbo, secretary-general of the Palestine Liberation Organisation, said on Tuesday after consultations with Hamas and Islamic Jihad, the two main armed groups in Gaza, that there was “willingness for a ceasefire and humanitarian truce for 24 hours”.