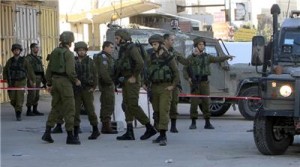 Israeli troops shot dead a Palestinian who allegedly rammed into them with his car on Thursday – the latest incident in a wave of violence in the occupied West Bank.

The army said one soldier was wounded in the alleged attack on the troops patrolling a road near the West Bank city of Nablus.

It was the latest violent incident since October that has killed 142 Palestinians and wounded 16,000 others, including 5,000 who suffered injuries from live or rubber-coated bullets, according to the Palestinian health ministry.

Alleged stabbing incidents and car rammings by Palestinians have killed 20 Israelis and a US citizen.

Meanwhile, Israel released the remains of seven Palestinians killed over the last three months. Three of them were from the Qalandiya refugee camp, situated south of the Palestinian city of Ramallah.

They were buried on Thursday night.

Israel is still withholding the bodies of about 40 other Palestinians – most from occupied East Jerusalem.

Palestinian leaders say a younger generation sees no hope for the future living under Israeli security restrictions and with a stifled economy.

Addressing the Palestinian people on the 51st anniversary of the Fatah party’s establishment, President Mamoud Abbas said on Thursday there won’t be peace until the Israeli occupation ends and a Palestinian state is established.

Abbas added that his Palestinian Authority will continue to govern.

“To those who are betting on the collapse of the PA or dismantling it – I say that is out of the question,” he said.