Missiles found on pro-Haftar base in Libya belonged to France 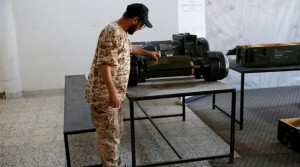 The French military said on Wednesday several Javelin missiles found in a rebel base in Libya were purchased by the French government from the United States but were defective and were meant to have been destroyed.

In a statement sent to reporters, the army ministry said the missiles were intended for the “self-protection of a French military unit deployed to carry out counter-terrorism operations”.

“Damaged and unusable the armaments were being temporarily stocked at a depot ahead of their destruction,” the ministry said adding that “they were not transferred to local forces”.

It is the first time since 2016 that France has publicly acknowledged it still has special forces deployed in Libya. It is not clear how many troops are deployed.

Last month Libyan troops loyal to the internationally recognised Government of National Accord (GNA) said they discovered a cache of US-made weapons they captured from forces loyal to renegade military commander Khalifa Haftar in the town of Gharyan in the mountains south of the capital Tripoli.

Haftar relied on military assistance from the United Arab Emirates, France and Egypt in his fight to capture the eastern city of Benghazi his current headquarters.

Mohammed Qununu a GNA military spokesman had previously said the seized weapons had markings on the missiles’ shipping containers stating that they belonged to the “Armed Forces of the United Arab Emirates”.

However last week the UAE denied ownership of the weapons saying that Abu Dhabi is committed to the UN Security Council’s arms embargo on Libya - which has been in place since 2011.

“The UAE also urges all parties to de-escalate tensions and to re-engage in the UN’s political process,” the UAE’s Ministry of Foreign Affairs said.

On Tuesday The New York Times cited an adviser to the French armed forces minister saying that his country had bought the four Javelin missiles which cost more than $170000 each from the US in 2010.

France has long denied allegations that it is assisting Haftar on the ground while also giving him diplomatic support internationally.

In April the military commander launched an offensive on the Libyan capital seeking to overthrow the UN-recognised government of Fayez al-Sarraj triggering fighting that has claimed at least 1000 lives according to the World Health Organization.

Haftar and his backers say they are trying to free Tripoli from militias they accuse of destabilising Libya since the fall of Muammar Gaddafi in a NATO-backed uprising in 2011.

His critics accuse him of trying to seize power from the GNA through force and deepening conflict between factions based in the east and west of the sprawling North African country.