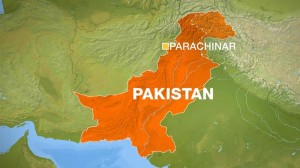 At least 34 people have been killed and more than 70 wounded when twin explosions ripped through a crowded market in northwest Pakistan, according to officials.

The bomb attacks, minutes apart, took place at Toori Bazar in the town of Parachinar, capital of Kurram tribal district, during rush hour on Friday afternoon.

“When people rushed to the site … to rescue the wounded, a second blast took place,” Nasrullah Khan told the AFP news agency.

“We fear that the death toll will increase,” Khan said, adding that no further details were available yet.

Al Jazeera’s Kamal Hyder, reporting from the capital, Islamabad, said a state of emergency had been declared in Parachinar.

“The military sent two helicopters from Peshawar to ferry the ones that are in need of help,” he said.

There was no immediate claim of responsibility.

The twin attacks followed a bombing earlier in the day outside the office of the police chief in southwestern Quetta, capital of Balochistan province, that killed at least 13 people.

Jamaat-ur-Ahrar, a faction of the Pakistan Taliban, has claimed responsibility for the attack in a statement sent out its spokesperson Asad Mansoor.

Pakistani Prime Minister Nawaz Sharif strongly condemned the attacks and directed authorities to beef up security arrangements across the country, according to a statement by his office.

“Terrorists are attacking soft targets and no Muslim can ever imagine to commit such horrific act, the prime minister said,” the statement said.

“Such acts of terrorism will be dealt with full power of the state,” Sharif said.

The blasts in Parachinar came on the final Friday of the fasting month of Ramadan, just days ahead of Eid-al-Fitr, one of Islam’s holiest festivals.

The third major attack to rock Parachinar this year, the blasts struck hours before iftar, when the streets are often crowded with people shopping for food to break their fast with the evening Ramadan meal.

“This happened on the last Friday of Ramadan, just a few days to go before the Eid holiday, so most of the people who were the victims in Parachinar were ordinary shoppers going about their shopping routines and possibly buying gifts for Eid,” Hyder said.

Kurram is one of Pakistan’s seven semi-autonomous tribal districts which are governed according to local laws and customs.