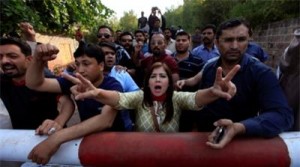 Pakistan police have launched a nationwide crackdown, arresting up to 1,800 supporters of cricketer-turned-politician Imran Khan in the run-up to an opposition rally planned later this week in Islamabad, according to officials.

The arrests on Monday followed intermittent clashes since the weekend between Khan’s supporters and riot police in the Pakistani capital that saw police using tear gas and batons to fight stone-throwing activists.

Police have conducted raids based on tip-offs and information about planned violence, according to Zaeem Qadri, a government spokesman.

Two security officials, speaking on condition of anonymity because they were not authorised to talk to the media, said the number of those arrested overnight ranges between 1,500 and 1,800.

The violence erupted again on Sunday near Khan’s suburban home and at several places on Islamabad’s outskirts.

On Monday, a Pakistani court barred Khan’s followers from demonstrating on Islamabad streets, restricting the rally to within the limits of a city park, according to Saddique Awan, a government prosecutor.

As of last week, the government had already enforced a two-month ban on street rallies in Islamabad.

The PTI has called for massive street demonstrations for Wednesday, threatening to lock down Islamabad in a bid to force Nawaz Sharif, the prime minister, to resign.

Those who pledge not to take part in violent actions are released, while those considered a threat remain in custody pending charges, he said.

Police have placed shipping containers on key highways leading to Islamabad to stop Khan’s party convoys from across Pakistan from reaching the city.

Chaudhry Nisar Ali Khan, the interior minister, said earlier that Khan’s followers had violent plans, which include the storming of government offices.

Sharif has been under pressure after his family members were named as holders of offshore bank accounts in leaked financial documents from Panamanian law firm Mossack Fonseca.

Pakistan’s Information Minister Pervaiz Rashid was removed from office on Sunday over a newspaper leak that sparked a rift between the army and government earlier this month.

“Evidence available so far points to a lapse on part of the information minister, who has been directed to step down from office to enable holding of an independent and detailed inquiry,” a statement by the prime minister’s office said on Saturday.

Sources from the Information Ministry said Rashid stepped down until the inquiry confirms whether he was the source for an explosive story detailing a top-level meeting at which security services were accused of assisting armed groups in Pakistan.