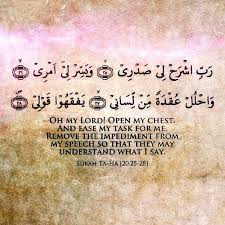 So Musa (alayhi as-salam) appeals to Allah subhanahu wa ta’ala to appoint Harun (alayhi as-salam), his brother, also as a prophet alongside of him, and make him a partner in this mission that he is being sent on. A lot of times we talk about a sign of manlihood and being a tough guy is saying things like, “I work alone!” “I don’t work with any partners.” “I’m a lone wolf.” Well, Musa (alayhi as-salam) is a prophet of Allah, and he’s even described as being a prophet who is very strong. A man’s man, a tough guy, and he’s asking for help. He’s asking for support, he’s asking for a partner on this mission. So it goes to show you, identifying the task ahead, and realizing what you’re going to need in your task, is intelligence.

Now another place in the Qur’an, in Surah al-Qasas, surah number twenty-eight. Allah subhanahu wa ta’ala tells us about Musa (alayhi as-salam) making this request to Allah. Ayah numbers 34 & 35 in surah number 28. He says, وَأَخِى هَرُونُ (Waakhee haroonu), why does he specifically ask for Harun (alayhi as-salam)? Obviously, he’s the brother of Musa (alayhi as-salam), so he says وَزِيرَ مِن أَحْلِى (wazeera min ahlee), I need somebody I can trust.  وَأَخِى هَرُونُ (Waakhee haroonu), he says, my brother Harun, هُوَأَفْصَحُ مِنِّى لِسَل نًَا (huwa afsahuminnee lisanan), he is a lot more eloquent in speech than I am. He is a lot more well spoken than I am. فَأَرْسِلْهُ مَعِىَ (faarsilhu maAAiya), so he says, “Oh Allah, so send him with me.” يُصَدِّقُنِى (yusaddiqunee), he will help me communicate and make my point. He will back me up. إِنِّى أَخَافُ أَن يُكَذِّ بُونِ (innee akhafu an yukaththiboon), because I’m afraid these people might not listen to me. They might try to call me a liar, and try to reject me.

Allah subhanahu wa ta’ala said, سَنَشُدُْعَضُدَكَ بِأَخِيكَ (sanashuddu AAadudakabi-akheeka). “We will strengthen your arm through your prophet.” Meaning, We will give you the support that you need in order to carry out your task through your brother. We will make your brother your support. وَنَجْعَلُ لَكُمَاسُلْطَنًا (wanajAAalu lakuma sultanan), and We will give both of you authority. We will appoint both of you as prophets of Allah. فَلَا يَصِلُونَ إِلَيْكُمَا (falayasiloona ilaykuma), and they won’t be able to get to you.

So Harun (alayhi as-salam) was very mature, very intelligent, very devout, and  also extremely eloquent and well spoken. He was like a preacher.

The lesson that we take from this is that, anybody who is working for the deen, anyone striving to make the world a better place, it’s not so much about admitting what you can’t do, but it’s very important to understand, identify, and recognize the talents that others have. You can’t be too arrogant to admit that somebody else is good at something that you’re not good at. That’s very important. Then when you find people who have talents and abilities, and can contribute something valuable, identify it, admit it, praise them for it, recruit them based on it. We have to understand that at the end of the day, we are not in competition with each other. We’re all on the same team. The team of Islam. The team of Allah. The team of the Messenger of Allah. The team of the Qur’an, so we don’t have any of these petty conflicts and arrogance and insecurities. We embrace each other’s talents and abilities. We facilitate people to be able to contribute and really be able to take the mission further through their talents and abilities. We see a great prophet of Allah, Musa (alayhi as-salam), identify that in his brother Harun.

So this is a story of the great Prophet Harun (alayhi as-salam) who Allah subhanahu wa ta’ala mentioned by name, multiple times. When the magicians fell into sujood and stated their iman in Allah in Surah Taha, they said رَبِّهَرُونَ و مُوسَى (rabi haroona wa musa). They said we believe in the Lord, the Master, the Raab of Harun and Musa. They said Harun before Musa.

May Allah subhanahu wa ta’ala allow us to be more like the great prophets and messengers of Allah.

If any of this information was good and true, know that it comes from Allah subhanahu wa ta’ala. If there are mistakes we ask for Allah’s Forgiveness and Mercy.