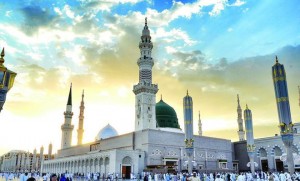 The Prophet Muhammad (peace be upon him) delivered a sermon on the last day of the month of Shaban, in which he welcomed the holy month of Ramadan and said:
O People! The month of Allah (Ramadan) has come with its mercies, blessings and forgiveness. Allah has decreed this month the best of all months. The days of this month are the best among the days and the nights are the best among the nights and the hours during Ramadan are the best among the hours. This is a month in which you have been invited by Him (to fast and pray). Allah has honored you in it. In every breath you take is a reward of Allah, your sleep is worship, your good deeds are accepted and your invocations are answered.
Therefore, you must invoke your Lord in all earnestness with hearts free from sin and evil, and pray that Allah may help you to keep fast, and to recite the Holy Qur’an. Indeed!, miserable is the o­ne who is deprived of Allah’s forgiveness in this great month. While fasting remember the hunger and thirst o­n the Day of Judgment. Give alms to the poor and needy. Pay respect to your elders, have sympathy for your youngsters and be kind toward your relatives and kinsmen. Guard your tongue against unworthy words, and your eyes from scenes that are not worth seeing (forbidden) and your ears from sounds that should not be heard.
Be kind to orphans so that if your children may become orphans they will also be treated with kindness. Do repent to Allah for your sins and supplicate with raised hands at the times of prayer as these are the best times, during which Allah Almighty looks at His servants with mercy. Allah Answers if they supplicate, Responds if they call, Grants if He is asked, and Accepts if they entreat. O people! you have made your conscience the slave of your desires.
Make it free by invoking Allah for forgiveness. Your back may break from the heavy load of your sins, so prostrate yourself before Allah for long intervals, and make this load lighter. Understand fully that Allah has promised in His Honour and Majesty that, people who perform salat and sajda (prostration) will be guarded from Hell-fire o­n the Day of Judgment.
O people!, if anyone among you arranges for iftar (meal at sunset) for any believer, Allah will reward him as if he had freed a slave, and Allah will forgive him his sins.
A companion asked: “But not all of us have the means to do so.” The Prophet (peace be upon him) replied: Keep yourself away from Hell-fire though it may consist of half a date or even some water if you have nothing else.
O people!, anyone who during this month cultivates good manners, will walk over the Sirat (bridge to Paradise) o­n the day when feet will tend to slip. For anyone who during this month eases the workload of his servants, Allah will make easy his accounting, and for anyone who doesn’t hurt others during this month, Allah will safeguard him from His Wrath o­n the Day of Judgment.
Anyone who respects and treats an orphan with kindness during this month, Allah shall look at him with kindness o­n that Day. Anyone who treats his kinsmen well during this month, Allah will bestow His Mercy o­n him o­n that Day, while anyone who mistreats his kinsmen during this month, Allah will keep away from His Mercy.
Whomever offers the recommended prayers during this month, Allah will save him from Hell, and whomever observes his obligations during this month, his reward will be seventy times the reward during other months. Whomever repeatedly invokes Allah’s blessings o­n me, Allah will keep his scale of good deeds heavy, while the scales of others will be tending to lightness. Whomever recites during this month an ayat (verse) of the Holy Qur’an, will get the reward of reciting the whole Qur’an in other months.
O people!, the gates of Paradise remain open during this month. Pray to your Lord that they may not be closed for you. While the gates of Hell are closed, pray to your Lord that they never open for you. Satan has been chained, invoke your Lord not to let him dominate you.”
Ali ibn Talib (RAA) said: “I asked, ‘O messenger of Allah, what are the best deeds during this month’?” ‘He replied: ‘O Abu-Hassan, the best of deeds during this month is to be far from what Allah has forbidden’.”

(Baihaqi reported on the authority of Salman Al-Farsi, may Allah bless him)