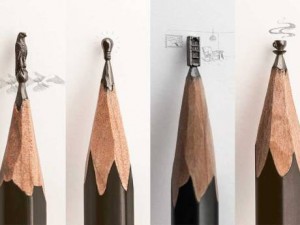 ‘Read More’ is the theme of this year’s Sharjah International Book Fair (SIBF), the 35th edition of which opens on Wednesday at Expo Centre Sharjah.

The slogan was selected to be of concise appeal for everyone to further their efforts in picking up books, with the exhortation based on reading being the key to civilisation, intellect, culture and human progress.

Accompanying the ‘Read More’ tagline are images featuring intricate carvings on pencil heads, each one carefully crafted by celebrated Russian artist Salavat Fidai. The figures comprise representations of a falcon, light bulb, camera, puzzle piece, coffee cup and library. Each one has been designed to portray the idea ‘Read More’ through its symbolism of being carved from graphite at the tip of the ubiquitous writing implement that is the pencil.

“The figures that represent this year’s theme of the Sharjah International Book Fair are carved on a pencil to tell the story of its importance in human history and its role in transferring the oral spoken tradition to the written one. We are forever indebted to the pencil, because in its variety of forms through the ages it has recorded the array of human achievements,” said Khowla Al Mujaini, head of Marketing at the Sharjah Book Authority, the organisers of SIBF.

Al Mujaini explained that the symbols have deep connotations, with the falcon representing the concept of strong, wide and deep vision, the light bulb symbolising enlightenment through imagination and the camera portraying the picture and its ability to document the present.

She continued that the carved puzzle piece on the pencil head summarises the relationship between inquiry and knowledge, while the coffee cup signifies relaxation, meditation and peace. Finally, the library, which is historically known as the house of knowledge, and the science closet full of treasures that enable nations and civilisations to rise.

SIBF 2016 takes place from November 2-12 at Expo Centre Sharjah. The renowned sculptor and artist Fidai will have his own stand at the fair, where he will be demonstrating his incredible graphite carving skills.