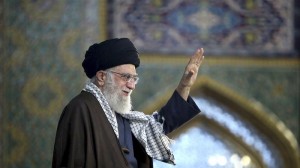 Iran’s supreme leader publicly chastised the country’s president and foreign minister on Wednesday, saying he disagreed with the implementation of the 2015 nuclear deal they negotiated with world powers.

The extraordinary comments by Ayatollah Ali Khamenei, the first time he’s criticised both politicians by name, came amid tensions with the United States a year after Washington’s withdrawal from the accord.

Khamenei has the final say on all matters of state, and his blaming the deal’s unravelling limits the influence of President Hassan Rouhani and Foreign Minister Mohammad Javad Zarif – relative moderates within Iran’s theocracy who had struck the deal.

It also shows the growing power of Iran’s hardliners.

“To some extent, I did not believe in the way that the nuclear deal was implemented,” Khamenei said, according to his official website. “Many times I reminded both the president and the foreign minister.”

Khamenei had given his implicit stamp of approval on the deal, which when signed sparked spontaneous celebration across Iran. The accord saw Iran limit its enrichment of uranium in exchange for the lifting of crippling economic sanctions.

But the agreement has unravelled after US President Donald Trump’s withdrawal and the reimposition of old sanctions and even stricter new ones.

Khamenei has previously warned the West, especially the US, was not trustworthy. But he hasn’t named the country’s top elected politician and his top diplomat before Wednesday night.

He’s previously said Rouhani and Zarif had done the best they could.

The White House earlier this month sent an aircraft carrier and B-52 bombers to the region over a still-unexplained threat it perceived from Iran.

Since that development, Iran has announced it will back away from the atomic accord. The United Arab Emirates, meanwhile, alleged that four oil tankers were sabotaged off its coast, and Iranian-allied rebels in Yemen have launched drone attacks into Saudi Arabia.

Both Washington and Tehran have said they want to ease heightened tensions in the region in recent days. But many fear a miscalculation between the two countries, who have a 40-year history of mistrust, could escalate the situation.

Khamenei’s comments come after Iran on Monday announced it had quadrupled its production capacity of low-enriched uranium. Iranian officials made a point to stress the uranium would be enriched only to the 3.67 percent limit set under the nuclear deal, making it usable for a power plant but far below what is needed for an atomic weapon.

But by increasing production, Iran soon will exceed the stockpile limitations set by the nuclear accord. Tehran has set a July 7 deadline for Europe to set new terms for the deal, or it will enrich closer to weapons-grade levels in the Middle East already on edge.