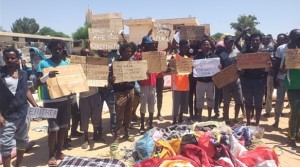 by Sally Hayden: Survivors of the deadly air strikes on a migrant detention centre in Libya that killed at least 60 people have protested and asked for urgent evacuation.

Since the attack on Tuesday evening, hundreds of migrants and refugees from Sudan, Ethiopia, Eritrea, Somalia and other countries have been sleeping outside the Tajoura detention centre, in east Tripoli, reluctant to return inside for fear of another attack.

The Tripoli-based Government of National Accord (GNA) has blamed renegade military commander Khalifa Haftar for the attacks, while a spokesperson for his self-styled Libyan National Army (LNA) denied it was responsible.

“We haven’t eaten since yesterday morning. We are fasting… until they make a decision,” said one man.

“We don’t need food. The only solution is to get us out of here. We need evacuation to a safe place.”

The survivors said they remain frightened even though doctors visited the location to give medical and psychological assistance.

They added that on Thursday, the guards tried to make them go back inside halls that were close to the weapons storage area, threatening to call fighters to force them inside if they did not comply.

Communicating through Facebook, a spokesperson for the Tajoura detention centre confirmed the detainees had refused to move inside but denied there was a weapons store near it.

Al Jazeera was sent a recording in which Libyan guards can be heard shouting at the refugees and migrants to get inside.

“The cell they want [to] lock us in is connected to three weapons store,” said a Sudanese refugee.

“As a human being, how can you put people in cells near weapons? We don’t need to stay in Tajoura, please help us, world,” said another man.

“This morning, we could hear air strikes taking place about 400 to 500 metres from us. [The targets were hit] four times, so we are scared,” said an Eritrean man. “The jets are still flying around us so we can’t understand why the UN refugee agency did not take immediate action of evacuating us to a safe place.

“Now we expect death only.”

Another Sudanese man said they could hear heavy weapons being used around them.

“We’re still on a hunger strike and nobody cares about us. We are still waiting in the heat. Our brothers are dead, why is no one answering?”

Survivors say they rejected a UNHCR plan to take 58 of them to a centre run by the organisation in a safer part of the city, saying they worried whoever was left behind would be abandoned and Tajoura’s guards would confiscate their phones so they couldn’t appeal for help any more.

UNHCR did not respond to a request for comment.

“I’m thanking God I’m so lucky because I [escaped] from [the] fire,” said one survivor, referring to Tuesday night’s air attack. Like others, he was worried for months something like this would happen because the detention centre is situated in a complex used by GNA-aligned fighters who use it as a military base.

“We are so scared. They are throwing bombs from the surrounding area, from their stores,” he said.

“We left our countries because of wars. We are just looking for protection and a better life. We were tortured, killed, forced into labour and forced to carry guns,” another man said.

Like other survivors, he also believes the death toll from the attack was under-reported based on the number of detainees in the hall that was directly hit.

“Here in Tajoura detention centre we have lost many migrants,” he said. “Some of the migrants were not found due to their bodies being cut into pieces … we can still smell the dead bodies.”

Almost 1,000 people have been killed since Haftar launched a push three months ago to capture Tripoli, the World Health Organization (WHO) said. Spurred by the attack on Tuesday, the UN Security Council called for a ceasefire on Friday.