The economic impact of US sanctions on Iran’s streets 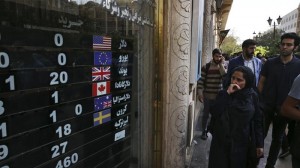 by Zein Basravi: On Sunday, Iran will begin the second phase of a plan to reduce cooperation with the 2015 nuclear deal and once again expand the scope of its domestic nuclear activity.

Tehran is likely to increase the level of uranium enrichment beyond the threshold allowed in the deal from 3.67 percent to five percent.

The Joint Comprehensive Plan of Action (JCPOA), a landmark agreement backed by the United Nations, is more fragile than it has ever been.

The US pulled out of the deal last year and reinstated sanctions on Iran. Other signatories – the United Kingdom, France, Germany, Russia and China – have been unable to mitigate the economic havoc meant for Iran.

But even with recent military escalations in the region that saw the US and Iran reach the brink of war, at its core, the JCPOA dispute is economic.

When President Barak Obama signed it, Republican critics who fought him on it said sanctions relief would enable Iran to substantially grow its economy and become an even stronger influence in the region.

Iran did experience a brief period of economic optimism that fuelled financial growth and foreign investment. After generations of economic isolation, Iranians were hopeful of a future that would see their country become a bigger player in the global marketplace.

After taking over the White House, President Donald Trump set about using sanctions to weaken Iran’s economy. International companies pulled out for fear of secondary US sanctions and Iran’s economy began to spiral.

Speaking during a special session of the UN Security Council in June, he said: “[Unilateral US sanctions] harm the poor more than the rich, the ill people more than the healthy people, infants and children more than adults. In short, those who are most vulnerable suffer the most.

“For instance, among the patients who suffer severe conditions and therefore need scarce and expensive medicine and advanced medical equipment – which in most cases have to be imported – suffer the most.”

For decades, sanctions have prevented Iranians from enjoying the freedom of trading on an open market.

Maziar Hashemi (his name has been changed to protect his identity) is in his 30s and works in Iran’s retail sector.

He recently returned from his first business trip to Armenia, where he said he was overwhelmed by how much more accessible the world felt from the capital of a country right next door.

Back in Tehran, he said, “People just want to be able to buy anything they want, whenever they want from anywhere in the world.”

It is a sentiment expressed by many Iranians who still enjoy some level of purchasing power. But in Tehran’s old bazaars, lower-income Iranians complain about the rising cost of nearly every kind of consumer product on the market.

“I wanted to come to the bazaar to lift my spirits, to have fun, but the prices are terrible,” said a woman in her late 30s.

“You can’t compare it to last year. Officials should explain why [the prices are so high]. Maybe one of the reasons is people themselves. As they hear something is becoming more expensive, they rush to but it. This is wrong they should wait and ignore some needs for a while.”

Shopkeepers are frustrated as well. With production prices doubling in some cases, businesses say they are left with little choice but to pass the costs on to customers. Even then, profit margins are getting thinner.

“A T-shirt I bought three months ago is now [twice as expensive],” said one angry shopkeeper in her 50s.

“At what price should I sell them? How much can I add to it to earn a profit? I don’t know what to say about the future, if it will get worse or not. But it is a very bad situation.”

Last month, the United States also added Iran’s Supreme Leader Ali Hosseini Khamenei to an ever-widening sanctions list. At this point, new sanctions are largely symbolic, but Iran’s economy minister hit back, saying Iran is ready to deal with any and all American sanctions.

Iran has been left with little choice but to cope with a worsening economy as best it can – exporting oil through back channels and smuggling basic goods into the country. Experts say the situation is dire and leaders are putting on a brave face.

“On the issue of sanctions, the nation of Iran has been oppressed but that does not mean it is weak,” said Khamenei after becoming a direct target of US sanctions.

“[Iran] is mighty. By the grace of God, the nation of Iran will powerfully reach all the goals it has set.”

Some Iranians support the country’s policy of resisting US pressure at all costs.

“We are fine to tolerate and do whatever we can for our country,” said one elderly man in line at a local bakery. “Yes there is pressure but we have to tolerate it. Our territorial integrity is important. We shouldn’t let foreigners violate it.”

Since the start of the year, President Trump has sent thousands more troops to the region, and an aircraft carrier, the USS Abraham Lincoln.

But many Iranians say armed conflict is not what they are worried about. The real war, they say, is economic and the real casualties are Iranian purchasing power and the value of the country’s money.

At a shisha cafe in the south of Tehran, a young man dismissed the recent US military build-up against Iran as being a major problem.

“Recent incidents like sending a carrier to the Persian Gulf, it hasn’t had impacts,” he said. “Last year, when the price of the dollar was nearly 200,000 Iranian Rials, that had an impact.”

Many see a bleak future. One man said Iran’s problems were not entirely America’s fault and suggested that government corruption was also to blame.

“Imam [Khamenei] said America cannot do a damn thing [but] our problem is not America now,” he said. “Our problems are internal.”