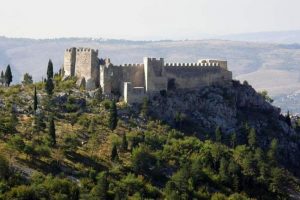 The medieval town of Blagaj will get a tourist lighthouse soon, and according to the director of the Agency “Stari grad” Mostar, Miralem Fajic, the lights will be set on the fortress of Herceg Stjepan. Fifteen spotlights will illuminate the fortress, and the project “The lighting of exterior walls of the Old Town Blagaj” will contribute to the development of tourism in this part of Herzegovina.

According to the director of the Agency “Stari grad” Mostar, the project “The lighting of exterior walls of the Old Town of Blagaj”, or fortress of Herceg Stjepan, will greatly help Blagaj.

“We’ll set up 15 reflectors in the form of lighting, burglar alarm system, video surveillance for the protection of the reflectors, approvals, cables … The project is worth around 35,000 BAM, and the reflectors will be placed two meters above the walls. Tourist lighthouse in Blagaj is intended for people who know how to enjoy the historical beauty of this city, and this is unique project,” said Fajic.

Director of the Agency emphasized that they are working on a project of conservation and maintenance of the Old Town of Blagaj for several years now.

Medieval edition of Stjepan Grad, where Stjepan Vuksic Kosaca ruled once upon a time, should return part of its glory, and hopefully enrich the tourist offer of this area.

Of the total amount of funds for the project, 5,000 BAM was allocated by the Ministry of Civil Affairs of BiH, and 30,000 BAM, according to the public invitation to which they applied, by the Ministry for Refugees and Displaced Persons of FBiH.

Stjepan Grad was once the town palace, surrounded by hard walls with peaks which are still visible. There is a legend that says that Herceg Stjepan allegedly buried his treasure there, and that Blagaj was named after Herceg Stjepan’s treasure.