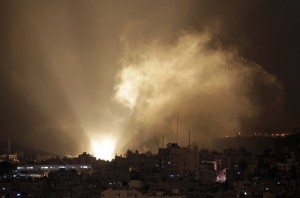 Bloodshed in and around Gaza has surged with a strike killing seven Palestinian children and a heavy overnight bombardment from Israel shattering hopes for an end to three weeks of devastating violence.
It was a bloody start to the three-day Muslim holiday of Eid al-Fitr which began on Monday, with international demands for an end to the fighting falling on increasingly deaf ears.
The pummelling of the tiny Palestinian enclave continued into the early hours of Tuesday, with flares lighting up the night sky and the constant thud and bang of explosions echoing across Gaza city.
“In the name of humanity, the violence must stop,” UN Secretary-General Ban Ki-moon said earlier after holding long talks with Israeli Prime Minister Benjamin Netanyahu, urging him to heed international calls for a ceasefire.

But Netanyahu appeared determined to press the offensive.

“We must be prepared for a lengthy campaign,” he said in a live broadcast after four Israeli soldiers were killed in a mortar attack on a Kibbutz in the Eshkol region of southern Israel, near the border with Gaza.
It brings the total number of Israeli soldiers killed to 48.
“We will not end this operation without neutralising the tunnels whose sole purpose is killing our citizens.”
As he spoke, the military sent messages to thousands of Palestinians, urging them to flee their homes and seek shelter in central Gaza City as troops prepared to step up their 21-day campaign.
Shortly afterwards, the skies over Gaza lit up as the Israeli army began a wave of air strikes and heavy shelling.
Medics told the AFP news agency that 10 people were killed in the first wave of strikes, among them  three children who died with two adults when a shell hit a house in the northern town of Jabaliya.

Some 1,095 Palestinians have been killed and another 6,500 wounded since the Israeli offensive started three weeks ago.

Monday had started with a deceptive air of calm in and around Gaza  following a quiet second night in which both sides appeared to be observing an undeclared ceasefire.
Despite the lull, there was little mood for celebration in Gaza City as the three-day Eid holiday got under way, with families quickly leaving the mosque after prayers to head straight home or to pay their respects to the dead.
But tensions rose sharply after medics said a shell had struck a building inside the Shifa hospital compound in Gaza City, which was quickly followed by reports of a blast hitting a children’s playground in a beachside refugee camp, which left 8 dead, seven of them children.
The Israeli army denied it had fired at either the hospital or the camp. Residents in the Shati camp said an F-16 firing several missiles at a motorised rickshaw.
Near the site of the blast, women wailed and men screamed in anguish in scenes of utter confusion and distress.
The children were playing on a swing when the strike hit the park, Ayman Sahabani, the head of the emergency room at Shifa hospital, told reporters.
Munzer al-Derby, 35, who witnessed the strike, told Al Jazeera: “The kids were playing on the wheel… A rocket fell and cut them apart.”