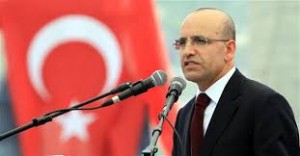 Turkey is committed to tripling the market share of Islamic finance, bringing it up to 15 percent by 2023, Deputy Prime Minister Mehmet Şimşek has said.

Speaking at a conference at the Gaziantep-based Hasan Kalyoncu University, Şimşek said the Islamic finance market had been growing swiftly in Turkey and that the government aimed to further boost the sector.

“Islamic finance currently enjoys a 5 percent share in the market. Our target is to increase this up to 15 percent by 2023. We would like to turn Turkey into a hub of Islamic finance,” he said, adding both state and private banks needed to develop their services in this area.

Şimşek also pointed out the slowdown in global trade, saying there was a discontent against globalism after the recent global crisis.

“Migration is another important issue for the global economy beside globalization. Millions of people are now immigrants,” Şimşek said.

“When other problems such as terror are added to this picture, many countries try to overcome the problems through protectionism rather than introducing reforms. But this affects the global economy negatively,” he said.

Şimşek urged countries to make immediate reforms, recalling the three main themes of the 2015 G-20 summit in Turkey, which were comprehensiveness, implementation and investment.

The minister noted the income inequality in the world, saying 62 people’s wealth was equal to 3.62 billion people. He said Islamic finance could play a positive role in addressing this problem.

“What the world needs is Islamic finance and tolerance. It needs the culture of people living together. Islamic finance curbs greediness to an extent due to profit-loss partnership. For example, debt issue becomes more manageable with this system,” he added.

Islamic or participation banks, which require interest-free lending, have been operating for over 30 years in Turkey. Five banks, two of which are state-owned, have a license to provide Islamic finance services.

According to the Participation Banks Association of Turkey, these five banks have over 950 branches operating across the country.

The total number of employees in the participation banking sector was around 16,000 as of June of this year.