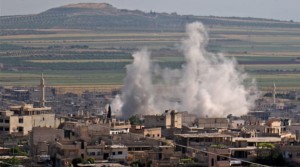 by Anchal Vohra: Turkey-backed rebels poured fighters onto the front line in northeastern Syria, joining forces with a rival armed group to beat back government troops from a town they had recaptured earlier this month.

Hay’et Tahrir al-Sham (HTS) seized the town of Kfar Nabuda in Idlib province on Tuesday with the help of the National Liberation Front (NLF), a conglomeration of rebel groups supported by Ankara. The town had been retaken by the Syrian government in its recent assault.

More than 80 combatants were killed in the battle for the town, according to the UK-based war monitor Syrian Observatory for Human Rights.

Mostafa Maarati – spokesman of the Al-Ezzah Army, which took part in the Kfar Nabuda operation and is part of the NLF – said it assisted HTS to protect the rebel-held territory from President Bashar al-Assad’s forces, a “common enemy”.

“The liberation operation had been planned in a mutual operation room that includes all the groups on the ground,” Maarati told. “They coordinated the use of anti-armour missiles and other weapons.”

NLF has clashed with HTS, formerly the al-Qaeda wing in Syria, over ideological differences and also over territorial control. HTS took over numerous NLF-run towns and villages but united with its adversary to oppose Assad’s army.

“Our goal is not only Kfar Nabuda, but we will also keep moving until we topple the tyrant Bashar Assad and liberate all our land,” said Maarati.

A senior commander with a moderate rebel group in the NLF, who spoke to Al Jazeera on the condition of anonymity, said despite their differences rebel groups are coordinating in a “battle for survival”.

“We cannot say they merged, but the people of the liberated north were attacked, their homes were destroyed, and their towns were occupied, so all of them had to defend their land together,” he said.

Adnan, a resident of Kfar Nabuda whose real name was not used for security reasons, has been hiding in a nearby town since the government began shelling and ground operations in late April. He gave an account of the plight of people as the attack unfolded and power changed hands.

“At 11 pm on Monday, April 29, the army of the regime started to bomb unarmed civilians who were sleeping,” he said. “Kfar Nabuda’s people fled without carrying any of their belongings. They were just trying to escape death.

“On Tuesday evening, a large-scale military action of all factions of the Syrian revolution began. They managed to liberate Kfar Nabuda completely.”

He said the rebels captured or destroyed a number of military vehicles and seized ammunition depots and medium and heavy weapons.

About 200,000 civilians have fled their homes since the Syrian government forces, backed by Russian air power, began its latest offensive.

Haitham Afisi, a senior NLF commander, said desperate times called for desperate measures. HTS abducted and tortured his son and held him captive for two years in 2013. Even so, he agreed to the two sides’ cooperation.

“The vile regime and its attempts to snatch new territories and displace thousands of our people in the north have pushed everybody to stand side by side,” Afisi said. “As Nusra (HTS’s former name) is the dominating power, we have had to temporarily coordinate with it.”

In September, Russia, Turkey, and Iran agreed to extend a ceasefire across northwest Syria and institute a 30km buffer zone between the forces. Turkey, afraid of a “humanitarian catastrophe” that would send three million residents running for the border, was in return expected to rein in HTS.

Ankara has tried to merge HTS into NLF but without success. Now, as the groups it backs work hand-in-hand with the HTS, Istanbul’s relationship with Moscow might take a hit.

Nicholas Heras, a fellow at the Centre for a New American Security, said Turkey was allowing Syrian rebel groups to fight alongside HTS to reinforce the rebel ranks in Idlib to prevent a collapse of the region.

“Turkey is also sending a signal to Russia that there is an escalation ladder that the Turks can climb to intervene in Idlib and that Turkey is still on one of the lower rungs of that ladder,” he said.

Arun Lund, a fellow with The Century Foundation, said despite their supposed coordination, Russia had given the green light to the offensive while Turkey was aiding the rebels’ defences. He said underlying this was their mutual struggle to determine the wider outcome in Syria.

“Russia and Turkey want to keep control over events in northwestern Syria, and they wrestle with each other and with Iran and with the Syrian sides over how the ceasefire regime in Idlib should be organised,” he said.

“It’s also part of a broader relationship in Syria that includes political talks over the UN’s constitutional committee, the Kurdish forces in the northeast, and other things.”

Turkey’s relationship with Russia depends on more than Idlib and its oversight of cooperation between HTS and other rebels, analysts say, and both want to contain the situation in the region.

“Turkey and Russia have to manage their clients, and it appears as if Ankara and Moscow have managed to keep this flare-up relatively small,” said Aaron Stein, director of the Middle East Programme at the Foreign Policy Research Institute.

“This approach allows the regime to slice and dice territory, but not in a way that creates levels of displacement that will force a migration crisis for Turkey.