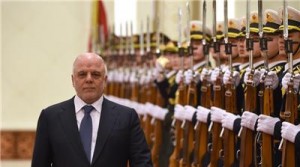 The Iraqi foreign minister has threatened Turkey with military action if it refuses to honour an agreement to remove its troops from Iraq’s northern region.

Ibrahim al-Jaafari said on Wednesday his government was committed to exhausting diplomatic avenues to avoid a crisis with Turkey, its northern neighbour, but insisted that all options remained open.

Likewise, Iraqi Prime Minister Haider al-Abadi told his counterpart that a Turkish delegation had promised to withdraw its troops, according to a statement from his media office.

The row flared after Turkey deployed a protection unit of around 150 troops earlier this month near Bashiqa military base where its troops were training an Iraqi rebel group to fight the Islamic State of Iraq and the Levant (ISIL) in nearby Mosul.

Iraqi security forces have had only a limited presence in Nineveh province, where the camp is located, since a larger contingent fled in 2014 after an advance by ISIL.

But Turkish President Tayyip Erdogan has said a total withdrawal is out of the question, and al-Abadi repeated to Turkish Prime Minister Ahmet Davutoglu on Wednesday that Baghdad had not approved the deployment.

Speaking on Wednesday night, Davutoglu said Ankara respected Iraqi sovereignty, but that Baghdad had no control over a third of its own territory.

“If Baghdad wants to use force, they should use it against Daesh,” Davutoglu added, using the Arabic name for ISIL.

Abadi said there was no reason for Turkey to expose its trainers to danger by sending them “deep inside Iraqi borders”, and that ISIL posed no danger to Turkey from inside Iraqi territory.

Bashiqa is about 90 km from the Turkish border.


On Wednesday, UN Secretary-General Ban Ki-moon offered to help Iraq restore basic services to Ramadi and allow refugees to quickly return to the city after it was largely recaptured from ISIL fighters.

Describing the advance in Ramadi as “an important victory,” Ban “stressed the need for measures to be taken to restore the rule of law as well as basic services in Ramadi as to allow for the return of internally displaced persons as soon as possible.”

He also said he was concerned about the abduction of a group of Qataris in Iraq in December and urged Abadi “to do everything possible to ensure their prompt and safe return.”

The 26 Qataris were on a falconry expedition in southern Iraq when they were abducted at their camp by gunmen who turned up in dozens of pick-up trucks.