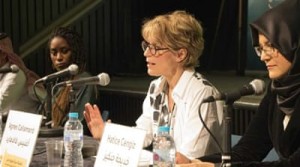 by Ylenia Gostoli: UN special rapporteur Agnes Callamard and Hatice Cengiz, the fiancee of slain journalist Jamal Khashoggi, have warned that democratic values worldwide would be at risk should Saudi Arabia escape accountability for his murder.

At an event in London on Tuesday night, they called on the international community to act upon a report published by Callamard on June 19. Her six-month investigation concluded the disappearance of the Saudi journalist was a state killing, carried out by agents of Saudi Arabia using state resources.

“I would like you to use this report as a means to prevent an attempt to silence us,” Cengiz said at the conference, which took place at Amnesty International’s headquarters. She urged European countries to “take this report more seriously”.

“Unfortunately since the report, there have been no serious steps against the criminals who have done this, or support from the member states of the [UN] Security Council,” she added.

It also argues that the murder should be treated as a crime with international jurisdiction, calling on UN Secretary-General Antonio Guterres to appoint a group of experts to conduct an international criminal investigation.

Callamard criticised the inaction of the United States, arguing the country “has the jurisdiction or at least the interest to take action” through an FBI investigation, a civil law investigation, or declassifying documents.

“If the CIA is sitting on information relevant to the killing, I do not see how this could be arguably threatening national interest,” Callamard told Al Jazeera.

“It would tell us more about what preceded the killing in particular, who may have been inciting the killing or even ordering [it]. All of this information is possible in the hands of the CIA,” she added. “Congress has asked for it. So far the White House is actually relinquishing its constitutional obligation to make that information public.”

Jamal Khashoggi had been a columnist for The Washington Post, where he wrote articles critical of the policies of MBS. He was a US resident living in self-imposed exile.

On October 2 last year, Khashoggi entered the Saudi consulate in Istanbul to pick up documents that would allow him to marry Cengiz, who waited for him outside the diplomatic office.

He was killed by Saudi agents inside the building and his remains have not been found.

After providing a series of contradictory versions of events, Saudi Arabia admitted in late October Khashoggi had been killed inside the consulate, claiming the operation was the work of rogue elements.

At least 11 low-level officials are on trial in the country, but human rights groups have expressed concern that the proceedings may be aimed at whitewashing the involvement of higher-level officials.

While a number of countries have imposed sanctions on some Saudi officials, Callamard is concerned they have proved ineffective insofar as they target low-level officials. She told the London audience the lists should include Mohammed bin Salman “until and unless there is evidence he had nothing to do with the crime or with the botched investigation”.

Germany halted arms exports to Saudi Arabia after Khashoggi’s murder. However, US President Donald Tr recently attempted to bypass Congress by declaring a “national emergency” over Iran tensions to complete an $8bn weapons sale to the kingdom, the United Arab Emirates and Jordan.

The UK government recently asked the courts to set aside a ruling by the court of appeal which had declared arms sales to Saudi Arabia unlawful for contributing to indiscriminate civilian casualties in Yemen.

Callamard argued that as governments attempt to defy public opinion, court rulings and their own democratic institutions, “what they are doing is creating a huge democratic deficit.”

“What is happening is a trickling down of Saudi Arabia’s authoritarian practice in our own societies through [its] influence and power … in the name of economic or geostrategic interests. That democratic deficit must be tackled,” Callamard said.

Cengiz told the London audience it is “too dangerous to behave as if nothing has happened” and that she is fighting for “justice for Jamal and all the other Jamals of the world”.