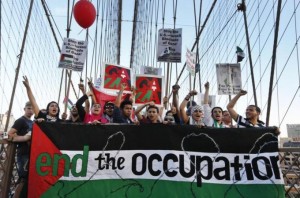 The resolution failed to muster the minimum nine “yes” votes required in the council for adoption.
Palestinian resolution calling for peace with Israel within a year and an end to Israel’s occupation by 2017 has rejected to the UN Security Council  a

It received eight “yes” votes, two “no” votes from the United States and Australia, and five abstentions.
Riyad Mansour, Palestinian ambassador to the UN, criticised the world body for the failure of the vote.
“The Security Council has once again failed to uphold its charter duties to address this crises and to meaningfully contribute to a lasting solution in accordance with its own resolutions,” Mansour said.
“This year, our people under Israeli occupation endured the further theft and colonization of their land, the demolition of their homes, daily military raids, arrests and detention of thousands of civilians including children, rampant settler terrorism, constant affronts to their human dignity and repeated incursions at our holiest sites,” he added.
The US, Israel’s closest ally, had reiterated its opposition to the draft resolution. Samantha Power, the US Ambassador to the UN, said the resolution undermined efforts to “achieve two states for two people.”
“It is deeply imbalanced and contains many elements that are not conducive to negotiations between the parties including nonconstructive deadlines that take no account for Israelis legitimate security concerns,” she said.
The resolution had called for occupied East Jerusalem to be the capital of Palestine, an end to Israeli settlement building and settling the issue of Palestinian prisoner releases.
The resolution also called for negotiations to be based on territorial lines that existed before Israel captured the West Bank, East Jerusalem and the Gaza Strip in 1967.
Israel had said the Security Council vote, following the collapse in April of US-brokered talks on Palestinian statehood, would deepen the conflict.
The Palestinians, frustrated by the lack of progress on peace talks, have sought to internationalize the issue by seeking UN membership and recognition of statehood via membership in international organisations.
Several European parliaments have adopted non-binding motions calling for recognition of Palestine.
The Palestinians had warned that if the bid to win support for a UN resolution failed they were prepared to join the International Criminal Court to file suits against Israel.