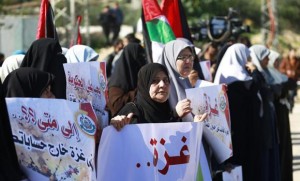 Palestinian unity government officials, including eight ministers, arrived in Gaza Monday to kickstart reconstruction of the territory devastated by a 50-day war with Israel, officials said.
The unity government was the fruit of an April reconciliation deal between the Islamist Hamas movement and the Fatah organization of Palestinian President Mahmud Abbas.
Monday’s visit is only the second by ministers since the government’s formation in June.
Government spokesman Ihab Bseiso told AFP the trip would last several days and was aimed at launching “the actual start of reconstruction” in Gaza.
Israel’s devastating 50-day war in July and August this year killed nearly 2,200 Palestinians, mostly civilians, and 73 on the Israeli side, most of them soldiers.
The Palestinian government says rebuilding the battered territory, which has experienced three wars in just six years, will cost around $4 billion (3.3 billion euros).
The eight ministers who are traveling to Gaza from the West Bank town of Ramallah are the ministers of health, education, social affairs and local government, and the heads of the water, power and environment agencies, who have ministerial rank.