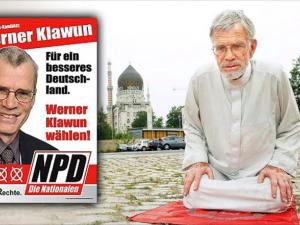 Werner Klauner, a deputy for the far right-wing extremist extreme right-wing National Democratic Party of Germany (NPD) has reverted to Islam. Know for his anti-refugee anti-immigration stance, Klawun is now the biggest supporter of refugees from Syria, Iraq and Afghanistan. Speaking to Germany’s Bild newspaper, Klawun who is now known as Ibrahim said he reverted to Islam after reading the poems on Islam as well as those praising the Prophet Muhammad by Wolfgang von Goethe and then pursued his own study of the Quran in order to understand Islam.

Upon his acceptance of the Islamic faith, Ibrahim explains how his ideas and thoughts completely changed and that he had cut contact with his past. He says that to cut his ties with the party was not enough and that he sought a bigger change to bring which he achieved by aiding refugees.

In 2014 upon accepting Isam, Ibrahim’s wife took their children and left the family home and shortly after hosted four Syrian refugees aged between 18-30 and now sees them as his own family. With an income of 900 Euros a month on retirement, they now help him showing the empathy and compassion that he showed them.